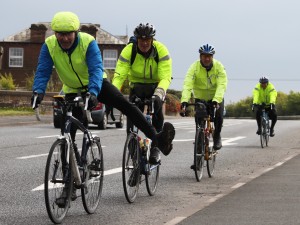 Praying for benign winds and friendly traffic the group left Land’s End ominously on Friday 13 April and were confronted by headwinds and regular April showers, a weather trend that was to continue for much of the trip. Their route led them through the ups-and-downs of the West Country, through rural Shropshire, leafy Cheshire, industrial Lancashire, the Lakes, the Borders, the Great Glen and finally the wilder extremities of north-east Scotland. Luckily there were no major mishaps, save a wedged chain, sore bums and a dodgy knee.

There was much talk of the F word, fatigue, good carbs, bad carbs, soft eggs, hard eggs, “What, no quails’ eggs?” and heated debates on who’s turn it was to sleep on the floor tonight, dear. The group’s roadies in the back-up motorhome kept a brave smile on their face as the fatigue led to fickle dietary requirements and desperate cries of “Don’t touch my legs!” It rarely rained much, and when it did, it was more a shower than a downpour, but sun cream was a fanciful cosmetic requirement on this trip. 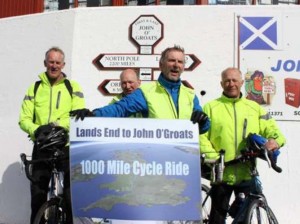 Three of the bikers stayed overnight in a variety of hostelries, pubs, hotels, camp sites and soon forgot carbo-loading in favour of the “full English (breakfast)”. The motorhome graced many a car park, the odd field and once parked outside a (very clean!) public toilet in Western Scotland. Refuelling pit stops punctuated the daily grind for the bikers and the chef’s imagination was challenged by their needs, wants and foibles. But, by the end of the trip, no-one was hungry, lacking in fuel or water and seemed only too happy to eat whatever was on offer.

John O’ Groats was reached in the early afternoon of Tuesday 24 April. A splendid effort for a crazy bunch of ageing geriatrics – 920 miles, 70.5 hours in the saddle over 11 days and 3 hours! They were tired, elated and satisfied. Their efforts led to healthy donations to various charities. Alex raised over £1500 for APP and the group collectively raised over £10,000. A fine achievement!