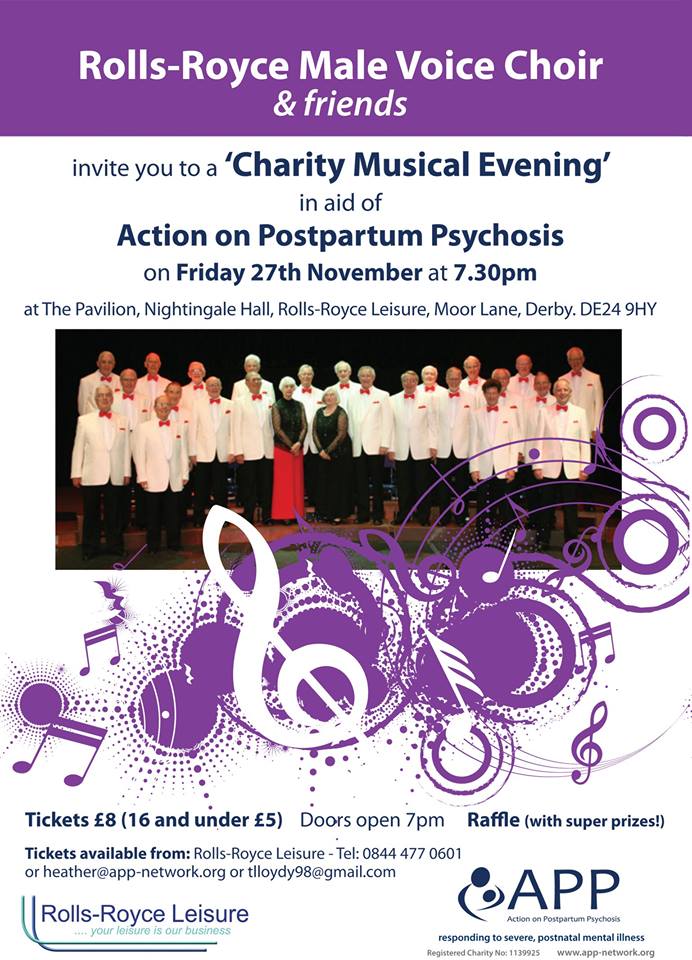 Join us on 27th November at The Pavillion, Derby, DE24 9HY for this wonderful charity fundraiser. For tickets Tel: 0844 477 0601 or email heather@app-network.org 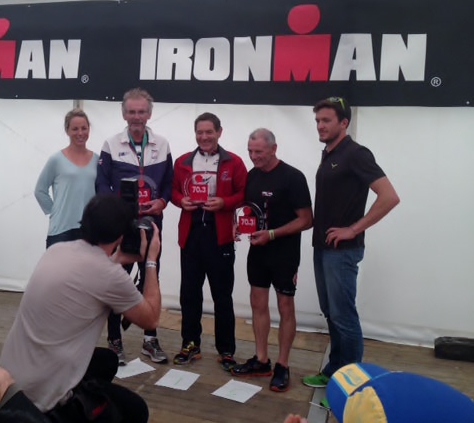 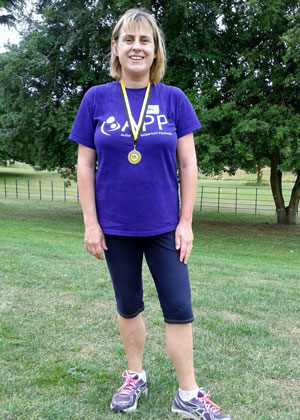 In June 2015 my sister-in-law joined me in a 10 mile charity walk through the Kent countryside. It was an exhausting but rewarding day, with the added bonus of plenty of sunshine and beautiful views. I selected APP as my chosen charity as the work they do for women and their families is so important. When I suffered postpartum psychosis myself 11 years ago there was very little user-friendly reliable information, and no access to peer support. It was a lonely and terrifying place to be, and the stigma surrounding mental illness really hindered me in properly engaging in the treatment and support that I was offered. I count myself very lucky to have achieved a good recovery.  The information produced by APP, their anti-stigma work and online peer support forum provides amazing support for women who experience this distressing and dangerous illness. I hope that the £180 I raised will be a really worthwhile contribution to their work.

Congratulations and heartfelt thanks to Tracey for completing the walk and raising funds too!

Jo, who is an enthusiastic supporter of APP, is running the Worthing 10K in June and raising funds for APP.

"I hope that mothers, partners & families everywhere will sponsor me in order to enable APP to address the ignorance, stigma & lack of provision which it has already done so much to address."

Running 10k will not be easy for Jo (is it ever?) so please spur her on by sponsoring her if you can. Let us try together to exceed her target! 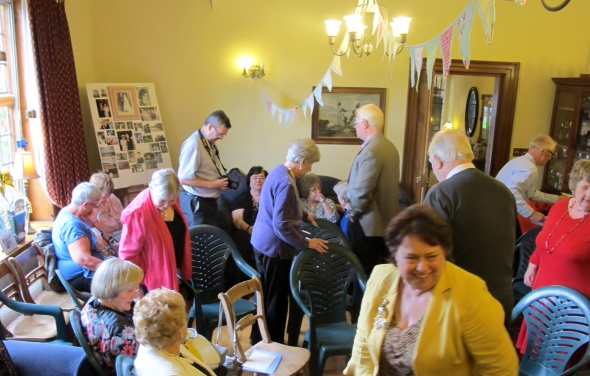 On Friday, 3rd April Sandra and Bob Chapman of Rosliston celebrated their golden wedding at Hoon Ridge in Derbyshire by kind invitation of Alex & Heather Heron.  An afternoon tea party was enjoyed by a very lively group. Sandra is a member of the local "Breakaways" choir who, in between scones and strawberries sang well into the evening .  Adrian Blamire entertained the party during the afternoon and Heather spoke about the valuable work of APP. Instead of presents Sandra & Bob asked for a donation to be sent to APP. We thank the happy couple for thinking of APP as they tripped down memory lane with their friends and family. A great sum of £192 was raised. Well done everyone! ...And what a great team of caterers! 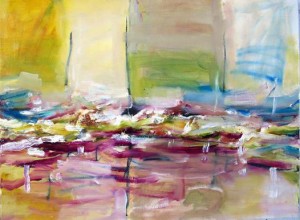 A unique and evocative piece donated by the exciting artist Dale vN Marshall was auctioned in December. After much anticipation and some fierce bidding, we were very pleased the final figure reached £594.

We would like to thank Dale and his supporters for this incredible chance to raise money to support, campaign, research, publish, inform and connect to build a better future for all those effected by Postpartum Psychosis. I’d like to add my own personal thanks for creating a remarkable body of work that transcends words and moved me so deeply. 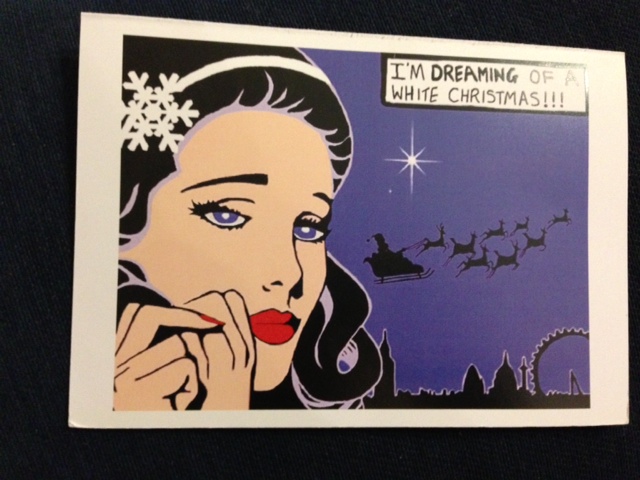 In November a talented artist, Alexis Stevens, designed and produced Christmas cards for  the Chelsea & Yorkshire Building Societies with the aim of donating all of the sale proceeds to APP.

The eye catching result with its London dreamscape and pop- art style is already selling well in the societies' branches- especially in London.

We feel sure that APP Members and Friends or supporters of APP throughout the UK would enjoy sending the cards - either in a "corporate" capacity or as personal cards to friends - not only to support fundraising but also to raise awareness of our charity (whose details are writ large on the back of each card!) 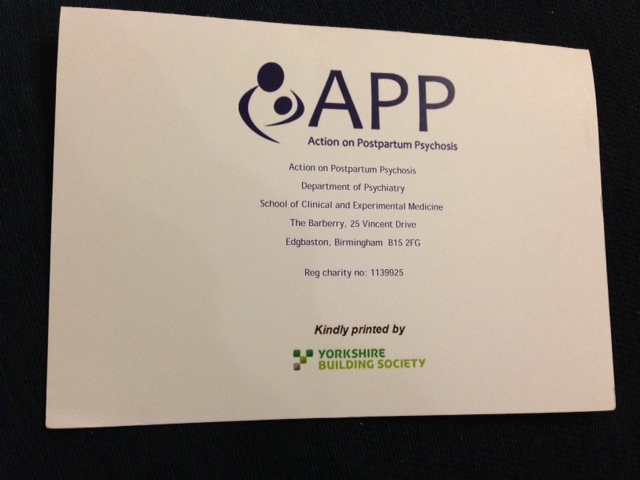 We should like to offer the warmest of thanks to Alexis & to the Westminster branch of the Society and also to the production team behind the project including: Alan Bale who has been so very helpful in getting cards out to branches and also to Donna Dunston who has sorted out production.

By seizing the initiative & supporting APP in this way, the Chelsea & Yorkshire team have shown just how flexible, caring, and energetically charitable such companies can be in support of those with serious perinatal mental illness .  So if you are near the following branches in London, Chelsea, Ealing, Fulham, Kensington, City, West End or Westminster, why not pop in as our ambassadors , say "hello", and buy some of the societies' cards ? Branch finder>

Warm thanks & a Happy Xmas to Alexis Stevens and all those at the Chelsea & Yorkshire Building Societies , who are supporting APP this Xmas season.

From the APP fundraising team

Our huge thanks go to Anna Jones who celebrated her 40th birthday by thinking of others. Anna persuaded her friends to join her in a recent charity London to Brighton bike-ride for APP. This really was no mean feat given that she managed to build a team of 34 women who trained for months to complete the ride. They all arrived in Brighton in a purple t-shirted haze of glory and raised the most magnificent sum of £11,598.82 to help us with our work. Again, we cannot thank team Anna Jones enough for what has proved to be a real highlight for APP. 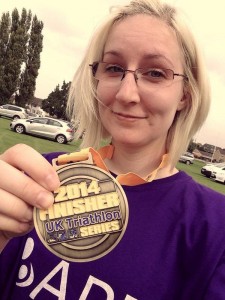 Our huge thanks go to Stephen and Kerstin Botham and to their friend Jen who successfully completed the recent North-West Triathlon Relay in aid of APP. The triathlon was the culmination of very many months of fundraising by team Botham on behalf of APP, in memory of their friend rosy who died after an episode of PP.

We cannot thank the Bothams' team enough for their months of arduous training and for the selfless giving of their time at the saddest of times for all concerned. Their efforts raised a huge sum for app of £4,325 which will be used to support and raise much needed awareness of PP so that other women might escape the tragedy which has faced Rosy's family and friends.