The Marathon took place on Sunday 3rd October, with 50,000 participants running on the streets of the capital, from Blackheath to The Mall.

On the same day, an additional 50,000 people had the chance to run a marathon distance wherever they were in the world by taking part in the virtual version of the event. 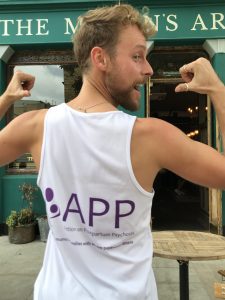 Jason says: "Brave women like my friend, APP Ambassador Laura Dockrill, have been coming forward to help break the stigma around mental health and postpartum psychosis. Ultimately, I’m doing this for all the mums out there as where would we be without them?”

Laura says:“This is very important to know, the illness can corner you and tell you so many lies, that you’re alone, that you’re a burden, that nobody has felt this terrible, that you should feel guilt or shame - none of it is true. The bravest thing a person can do is ask for help, you’ll be met with open arms. It doesn’t make you a bad person or a bad mum. And there’s no ‘bad’ time to feel unwell. Find APP for more information and support.”

You can still visit and donate to Jason’s fundraising page here. 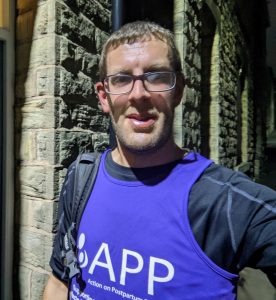 Andy ran the London Landmarks Half Marathon for APP in August earlier this year. He’s supported APP again as he says: "APP has supported me and my partner Em, as well as many other families like ours, through recovery from a mental health illness that strikes new mothers. Em spent three months out of the first six months of our daughter’s life in a Mother and Baby Unit (MBU) suffering with postpartum psychosis (PP) and then postnatal depression (PND). APP has a support network in place that we have both used over the last few years as Em has recovered from the long term effects of this illness. I am proud to support them, proud to run for them, and proud of Em and what an amazing mother she is to our little girl."

You can still visit and donate to Andy’s fundraising page here. 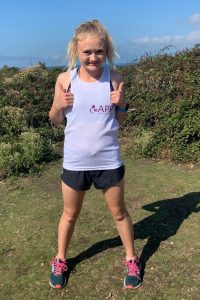 Sophie is a student midwife and says: "After going through my own mental health struggles many know I’m passionate about speaking out and raising money for mental health charities and APP is a brilliant one to be supporting, helping women with postpartum psychosis. As a student midwife I identify even further with this charity and I think it’s so key for women to get the support they need with perinatal mental health issues as soon as possible so charities like this are essential and I’m proud to be running for them."

You can still visit and donate to Sophie’s fundraising page here.

Dave’s wife Esther experienced PP in 2017, and he says: “Not long after we welcomed our son to the world, my wife Esther developed a rare condition called PP. We’d never even heard about this mental illness that affects 1 in 1,000 new mothers. We’d only ever heard about postnatal depression - which is why it caught us both out of the blue. Thankfully with the professional support from the local NHS Perinatal Team, Esther recovered. I want to raise awareness of PP and APP which specifically supports new mothers (and their partners) with the condition.”

You can still visit and donate to Dave’s fundraising page here.

Esther was a midwife for 18 years and qualified as a health visitor in 2018. She ran the virtual London Marathon for APP last year and is supporting APP again as she says: “APP is a charity close to my heart personally and professionally. We are in desperate need of a MBU here in North Wales and I am hoping to raise more awareness and highlight the need for such vital facilities for families experiencing postpartum psychosis”.

You can still visit and donate to Esther’s fundraising section on her Facebook page here.

Karen who is now a health visitor and a nurse lecturer experienced psychosis after the birth of her first baby 20 years ago and says: “My psychiatrist wanted to admit me to hospital, and I was desperate to be somewhere safe but with no access to an MBU I was allowed to stay at home as my partner took time off work to look after me and our baby. We had twice weekly psychiatrist visits and CPN support. Fast forward 20 years and there is still no MBU.”

You can still visit and donate to Karen’s fundraising page here. 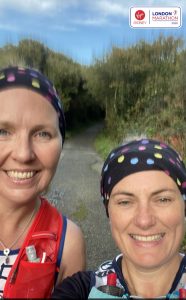 Our six runners have raised more than £4,900 for APP. We would like to thank Jason, Andy, Sophie, Dave, Esther and Karen for supporting APP and everyone who has donated.

If you have been inspired by our runners, we would love to support any fundraising ideas you have. Get in touch here.