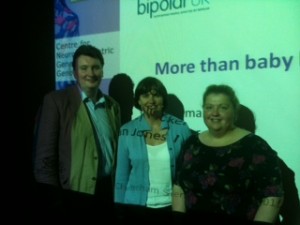 Our 'More than baby blues?' presentation at the Cheltenham Science Festival this year was very well received with a turnout of nearly 100 people. Considering the damp, cold and very blustery night, we were impressed by the audience's stamina!

Tracy spoke very honestly and was forthright about the horrors - and the humorous aspects of her experience of PP – thank you Tracy.

The response the three speakers, Dr Ian Jones, Clare Dolman and Tracy Vicker received was excellent, with plenty of interesting questions from the audience at the end. People came up afterwards to thank us for a very informative talk and said they felt they had a much better understanding of the condition than previously.

Well done and thank you to the speakers, supporters and organisers. Also, a big thank you to all those who attended, we hope you enjoyed it as much as we did!

Can You Help with a Research Project on Postpartum Psychosis?

I would really like to chat with you about your experience of Postpartum Psychosis. What was it like for you and your family following your diagnosis? And what types of services/support were made available to you? This should take no more than an hour and I am happy to meet wherever is most convenient for you.

The national Bipolar charity’s Conference 2012 takes place in London on Saturday 23rd June 2012. ?Included on the timetable are APP Chair Dr Ian Jones and trustee Clare Dolman, who will be running a workshop on bipolar and pregnancy with members of APP and Bipolar UK.

The keynote speaker is Paul Abbott, Bipolar UK Patron, and one of the country's most critically and commercially successful television writers, responsible for creating highly acclaimed, popular television dramas such as Shameless and State of Play.

The full programme and application form is available from Bipolar UK's website www.bipolaruk.org.uk

Following the airing of ‘Unravelling Eve’ program on BBC Radio 4, the feedback we have received has been tremendous. The program was extremely well received by people from all backgrounds and interests and many have been in touch expressing their gratitude to everyone involved for their time and efforts in making it happen.

The women who took part in the workshops also received a great deal of positive and supportive feedback from friends and family. Having listened to the program, they now have a greater understanding of the challenges the women went through, and some friends were surprised by how little they already knew. We are very grateful to everyone who took part and appreciate how difficult and emotional it can be to speak about things they have probably never spoken about before. There was an instant rapport amongst the women and very quickly strong friendships formed. They all reported that taking part was a fabulous opportunity to finally meet and chat freely with others who instantly understood. They described the workshops as an extremely positive experience, emotional yet healing and cathartic.  The program is available to listen to by Clicking here.

We are very excited at APP that a Radio 4 documentary about the work we have been doing with Joan Malloy is to air next Monday, 5th December at 11:00 on BBC Radio 4. Here is how the program is described on the radio 4 website:Women who've suffered psychotic illness after childbirth talk about their journey back to recovery.

Between one in 500 and one in a thousand women suffer from postpartum psychosis after childbirth. It's an illness which often appears rapidly and without warning and leaves women in the grip of psychotic delusions or of mania. They talk of losing touch with reality and feeling split and fragmented. However, because it's comparatively rare and can happen to women with no history of mental illness, postpartum psychosis may go undiagnosed or be confused with post natal depression. In fact if it's treated properly, recovery from this very severe disorder can be very swift.

Now Radio 4 has been offered unique access to a group of women who have experienced the illness. They're taking part in an art project, funded by the Wellcome Trust, whose aim is to raise awareness of the condition.

As they meet at a workshop and in the artist Joan Molloy's studio they talk openly about what they went through, the hallucinations they suffered in the depths of the psychosis and their journey back to health. They also tackle the difficult topics of whether they wanted to harm themselves or their baby, the decision about whether to have a second child, and their perception of themselves as mothers.

The art project is supported by leading perinatal psychiatrist, Dr Ian Jones, who is working with teams in Cardiff and Birmingham universities to try to discover what it is about the physical experience of childbirth that triggers the illness. He tells us if they were able to establish whether some women had a genetic pre-disposition to the condition, it would be possible to predict which women were at high risk and to take the right steps before rather than after the illness has struck.

Presented by former journalist - Clare Dolman, who suffered an episode of postpartum psychosis herself after the birth of her first child twenty two years ago. She is a trustee of Action on Postpartum Psychosis and now works to raise awareness of the disorder.

Congratulations to Steph Brackpool and Mark Cox (Ward Manager of the MBU at Birmingham) for completing the Cardiff Half Marathon on behalf of APP. Steph hit 60 years old in January this year and has not done a competitive run before. This was Mark's first run too. Steph's and Mark's fundraising sites at Virginmoneygiving will remain open for another month. So far they have raised over £1200 for APP. Steph writes about her experience here. If you would like to join the APP running team and help to raise money for APP get in touch with Heather, Sue or Nicola at fundraising@www.app-network.org

APP are delighted to be working with artist Joan Malloy on this exciting Wellcome Trust funded arts project. Joan is developing a body of work which reflects upon issues of motherhood, inheritance and the familial implications of PP. A weekend workshop earlier this year allowed Joan to hear the experiences of a number of women from APP. The work is progressing well and has been the subject of a Radio 4 documentary that aired on December the 4th 2011. We are very excited about this project and look forward to sharing with you the work that is produced next year.

Joan’s past work has been an exploration of time, focussing on memories of childhood, family relationships and ageing, through a combination of photography, film, object-making and installation. Following years where her work has focused on family relationships – exploring shared experience from multiple perspectives – the work with APP will be a natural progression – exploring the shared experience of motherhood from the multiple perspectives of those who took part in the workshop. Joan’s intention is to create work which includes an arresting piece of film, which encapsulates the genetic science and values the personal narrative accounts from women from APP who have participated in the project.

Early in 2010 we set about applying for formal charitable status to help us raise money for research into PP and APP projects. We are nearly at the finish post, and will have a charity number in early 2011. We thank Heather and Sue for their dogged determination with the process and paperwork. We now have a formal structure with a steering committee, chair, vice chair, secretary, and treasurer.

Until now, Ian and I have answered emails from members in an ad hoc way. Over the next year, Nicola Muckelroy will be setting up a Peer Support Network using trained volunteers who have recovered from PP themselves. Initially they will offer support to women and their families via email. People should telephone the Cardiff office to join APP, for information about peer support, or for signposting to resources and sources of advice.

In terms of research, we have had an exciting year. Our molecular genetic work is producing interesting findings, including overlaps with another pregnancy related condition, pre- eclampsia. Ian explains more about these exciting findings on the research page. We have produced the first piece of formal evidence from our postnatal care survey that Mother and Baby Units are more appropriate than general psychiatric units for women with illness following childbirth. We are also leading the way in terms of 'service-user' research, with a publication due out next year and presented at UK and international conferences.

Plans for 2011 include a postal survey and telephone interview study of the experiences and support needs of partners during an episode of PP. A media training workshop is planned offering women who wish to raise awareness of PP the chance to practise with real equipment and experienced trainers. Rachel’s study on changes in identity after PP will be complete next year. A study of second pregnancies is recruiting women who are pregnant or planning pregnancy, and, of course, our large scale studies of the causes and genetics of PP will continue to produce exciting results.

Spreading the word by Clare Dolman

APP was represented at several conferences in 2010, both nationally and internationally. We started off in London in March at the Mental Health Research Network’s (MHRN) Service Users’ Annual Conference. Delegates at the day-long event visited the APP display and took newsletters away with them to spread the word about our new website. Even more people did the same at the two-day Scientific Conference of the MHRN in April which was held at Bristol.

In June we had a whole team attending the annual Conference of MDF the Bipolar Organisation held at Birmingham University’s Medical School. Because of the high risk of postpartum psychosis for women with bipolar, our stand attracted a great deal of interest from women and their partners eager to find out about the risks and the best way to cope with them.

In the Autumn, we ventured further afield to Pittsburgh, USA, for the Biennial International Conference of the Marcé Society. The Society was named after Louis Victor Marcé, a French psychiatrist who wrote the first treatise entirely devoted to perinatal mental illness, published in 1858. Its principal aim is to promote, facilitate and communicate about research into all aspects of the mental health of women, their infants and partners around the time of childbirth. With hundreds of delegates from all over the world attending, this was a great platform to tell people about APP and make them aware of our resources for women who have suffered postpartum psychosis – and for health workers who need to learn more about the condition.

I gave a presentation telling delegates about the work on recovery that members of APP produced with Dr Jess Heron and a team of researchers in Birmingham last year. Dr Jess Heron gave a presentation about ‘Women's satisfaction with Mother and Baby Unit care versus other models of postpartum psychiatric care’. Dr Jones gave a keynote speech about new research into Postpartum Psychosis. There was a lot of interest, especially from American colleagues, in the potential of the APP website as a source of support and information for women in this situation wherever they live in the world. APP got another mention on the main stage when Dr. Ian Jones accepted the Marcé Medal for his outstanding contribution to perinatal psychiatric research.

We are extremely grateful to the Mental Health Research Network Heart of England Hub for providing a small grant to enable women with experience of PP to attend and present research at UK and International conferences.