My experience of postpartum psychosis was completely out of the blue. When my eldest, Sebastian, was born in September 2009, I’d enjoyed a really normal pregnancy. I’d had no prior mental health problems and, because of that, I had no idea what was happening to me when things started to go wrong. 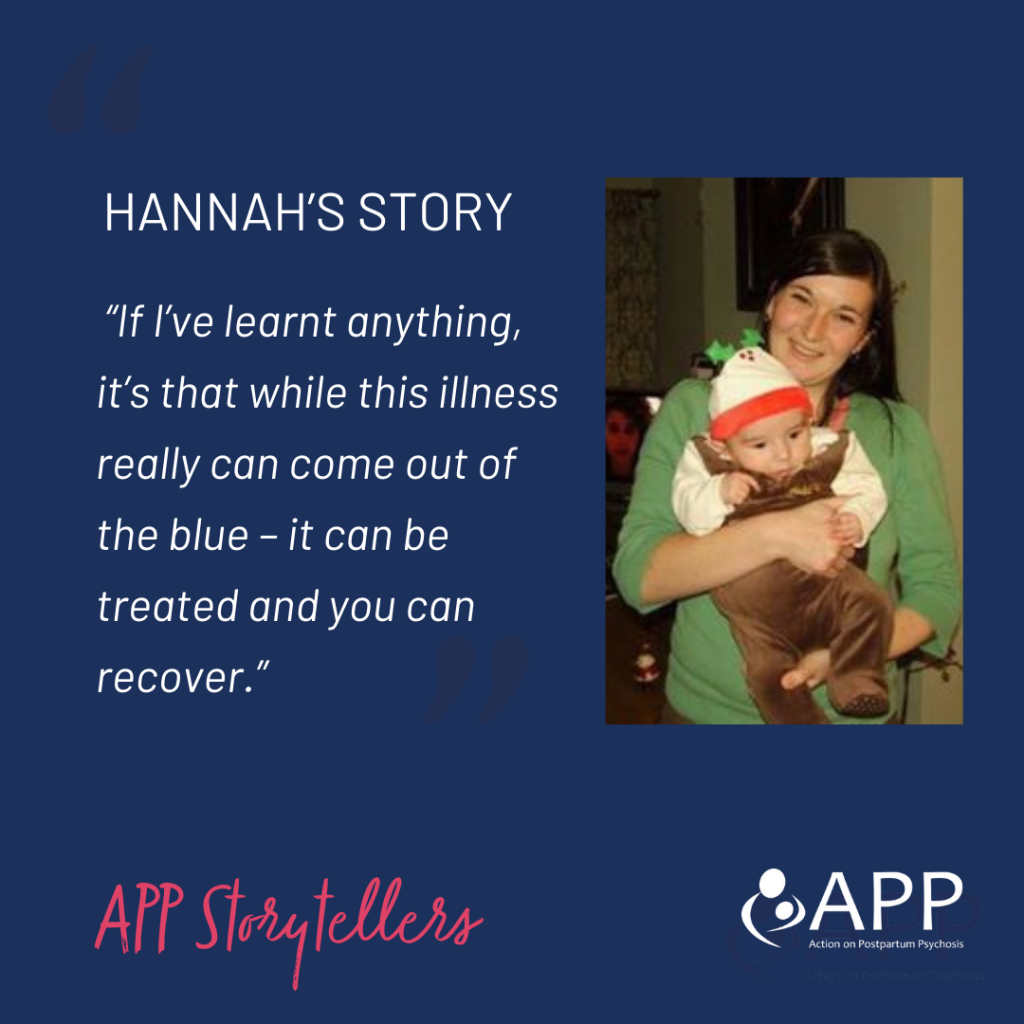 Unfortunately, after a relatively calm and happy pregnancy, I went through a really traumatic birth, where I was transferred to hospital by ambulance and had to have an emergency C-section.

Back at home, just days after Sebastian was born, I noticed that I wasn’t sleeping properly and felt really quite anxious. As a first time mum, I assumed this was normal and tried to ignore it. However, the anxieties became obsessional and I felt paranoid. The midwives were concerned and advised I see a doctor which I did, but I was told to ‘pull myself together.’ So, thinking this must all be normal, I went back home and tried to get on with being a mum.

A big problem for me in the early days was that I was struggling to breastfeed. This, I now know, is not unusual, but my response to it was. I became really quite fixated on it and obsessed over it. The midwives supported me through it and tried to help me with alternative feeding options, but then I started to obsess over Sebastian’s weight. I also became obsessed with folding his blankets in a very particular way and checking the temperature in each room over and over again.

The midwives were really supportive but the problem was, I never really saw the same person twice, so it probably took a bit longer for them to notice the progression of my symptoms. Still, they pressed for me to see another doctor and made the appointment for me.

This was when my illness started to become really apparent to everyone around me.

It’s hard for me to recall this period with any degree of clarity, but my husband said that when I had to get ready for the appointment, I flew into a panic and threw such random clothes on that I didn’t look anything like my usual self. I couldn’t speak, I couldn’t make eye contact with the GP and, because of my presentation, he referred me to a psychiatrist at a mental health unit.

However, I think I managed to pull the wool over the psychiatrist’s eyes a bit. I remember flashes of sitting in the waiting room and thinking that I needed to convince them all that this horrible dread I was feeling was nothing.

I was terrified that if they saw how unwell I really was, they’d take my baby away from me.

Perhaps due to my efforts, and the lack of awareness of postpartum psychosis at the time, I was wrongly diagnosed with postnatal depression. I didn’t recognise that diagnosis at all as I knew I couldn’t be depressed – my moods were anxious and erratic and manic. Additionally, although I never disclosed it to anyone as I was so scared at what was happening to me, I was beginning to hear whispers and see flashes out of the corner of my eye.

After being sent home from the mental health unit that day, however, crisis hit.

My husband recalls waking up in the middle of the night to find all the lights on. He got up and found me wandering around frantically, talking to myself.

He rang the crisis team but, when they knew the baby was OK, they just suggested he call back the next day. But I really wasn’t OK. It must have been so frightening for my husband too, to see me so out of control like that. He sought help from his dad and they both took me to hospital where I was immediately sectioned and hospitalised the following day.

Initially, I was put on a general mixed psychiatric ward without my baby. I completely unravelled at that point. I was running around screaming, throwing plates of food, not knowing if the baby I had given birth to was real or a figment of my imagination. I didn’t trust any of my own thoughts or feelings.

I became obsessed with things again – this time with alarms sounding, but the nurses would tell me there were no alarms going off so it was obviously a hallucination. My mind felt completely broken. I never wanted to hurt me, or my son, or indeed anyone else. But I thought everyone was trying to hurt us.  I didn’t know where my son was – I even wondered if he was dead and it was my fault.

After two weeks on that psychiatric ward I was referred to a hospital in York, a bit further away from home. I wasn’t reacting to my medication and was so high and manic. I still wasn’t sleeping and was barely eating or drinking. The fact that I wasn’t looking after my body and was throwing myself around also caused physical problems for me – particularly in respect of the C-section wound.

Eventually, I burnt out. But this wasn’t the end of the experience.

I was left almost catatonic, completely flat and like a shell of my former self. They changed my medication and I underwent ECT (Electroconvulsive Therapy) and I was transferred into a mother and baby unit. At least then I was able to spend time bonding with my baby and I had my own space - although I still had access to the main ward and TV room.

After all this, I was eventually given some leaflets about postpartum psychosis. This was around 28 days after my section. I began making steady progress and was no longer psychotic but I was still incredibly anxious. So we took things slowly and I had a day at home on Christmas Day, but other than that, we upped my leave incrementally until I was finally ready to move back home permanently in January 2010.

When I got home, I saw this amazing CPN (Community Psychiatric Nurse) who would visit me and one of things she did was take me out for coffee and cake. It made me feel normal – as if I was just a normal mum out with her baby and a friend. I had access to this support for three years and it really helped me transition back to normality.

I was finally discharged completely from mental health services in 2012. I’ve had no subsequent episodes, and my second baby came along with me experiencing no symptoms of psychosis. Of course, I was understandably anxious at times, but, after being referred to Professor Ian Jones by my GP I saw a psychiatrist locally at eight months pregnant.  Finally we were able to plan for that early postnatal period and I took anti-psychotics for a short time after the birth just to be safe.

Since the traumatic time when I was unwell and recovering from PP, which wasn’t just difficult for me, but also for my husband and family too, life has been good. Of course, things are never perfect and there are ups and downs, but I feel as though my mental health is back to where it was pre-2009. I just hope that mums today are able to find help more quickly than I did if they experience the symptoms of postpartum psychosis.

But if I’ve learnt anything, it’s that while this illness really can come out of the blue – it can be treated and you can recover.