Charlotte had never heard of postpartum psychosis (PP) when she gave birth to her first child in 2012. However, it was when she was still in labour that she first experienced the hallucinations, delusions and intense anxiety that comes with PP. Unfortunately, due to a lack of awareness at the time, it was wrongly assumed that Charlotte was suffering from PND (postnatal depression) and it would be another six months until the real nature of her illness was ever confirmed. 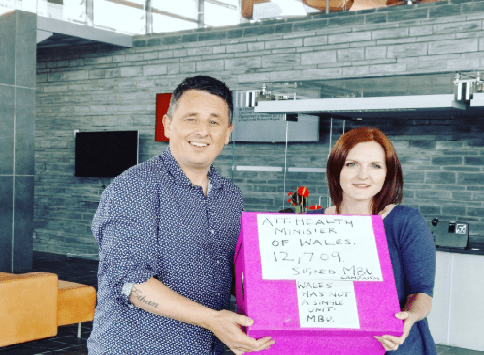 Above: Charlotte and Mark Williams campaigning for an MBU in Wales

Having lived with extreme anxiety disorders, an eating disorder and alcoholism from a young age, mental health had always been of concern. So when Charlotte fell pregnant with her first child, her midwife referred her to the Cardiff perinatal mental health team – just to be safe. She was able to speak at length with a psychiatrist about the risks and was assured that, with Cardiff’s MBU in operation, there was a clear pathway to care should she need it.

Funding cuts, however, soon took away this much-needed safety net resulting in an extensive period of acute mental ill health for Charlotte.

25 years of age and overjoyed to be pregnant, Charlotte was looking forward to welcoming her first child into the world. However, things became difficult after 33 hours of labour, when Charlotte began hallucinating. She was convinced that there were men in white coats walking in and out of the labour suite, but when Charlotte asked her husband and midwife why they were there, they had to tell her that there was nobody there. The midwife assumed that Charlotte’s hallucinations were the result of confusion from extreme tiredness and the gas and air she was given.

The labour continued and was long and traumatic. Charlotte had had little to no sleep for a week and suffered a postpartum haemorrhage – further adding to her distress. Her husband was sent home three hours after the baby was born, and she was transferred to the maternity ward.

Left feeling alone and scared, coping with frightening delusions and hallucinations as well as learning how to hold and feed a baby for the first time, Charlotte was plunged into a world of paranoia and fear. Her head spinning, all she could hear was whispering coming from the cubicles around her, as if everybody was talking about her behind her back. Even though her baby was crying, she desperately wanted to run away and, at one point, sat on the wall outside of the hospital feeling detached from reality. Charlotte even believed at this point that she might be dead and looking down on herself from above.

The next morning, Charlotte was too terrified to tell her psychiatrist about the whispers and the hallucinations. She was already paranoid that people were trying to take her baby away, and so believed that confiding in them about the strange sensations she was experiencing would only strengthen their case for removing her child.

Instead, Charlotte assured her psychiatrist that all was well and that she just wanted to get home to sleep.

As the weeks went by, however, Charlotte’s mental health got much worse and her husband took her to see the doctor. Charlotte was still too afraid to tell anyone about the voices and whispers – as well as the new delusions she was experiencing – where she believed that her husband was drugging her. The doctors diagnosed her with PND.

At this point, Charlotte was seeing and hearing things that weren’t real on a daily basis – whether it was something small like a mouse running across the floor, or something big and traumatic, like her husband jumping through a closed window. Eventually, six months after giving birth, the mental health crisis team were called and came to see Charlotte in her home. She had been talking to the radio and her husband had witnessed this and been really taken aback – it was the first time he had seen first hand the extent of Charlotte’s symptoms. She was immediately diagnosed with PP.

But just when she needed the MBU in Cardiff for emergency care, she discovered it was due to close. Other than travelling hundreds of miles away from home, a general adult psychiatric ward was the only option for inpatient treatment. However, because Charlotte was unable to take her baby with her, and because she was already so terrified that people were trying to take her baby away from her, it simply would have made matters ten times worse.

Instead, Charlotte received home treatment which involved a combination of medications and lots of support from her husband, who had to dedicate his time to looking after her.

Eventually, Charlotte found herself responding positively to the treatment and, when her baby turned one, she was back to full health. But knowing what she knows now, that other women experiencing PP can often recover within weeks when they have access to specialist care at an MBU, Charlotte is determined to raise awareness and campaign for more of these services so that other mums don’t have to endure the year-long illness like she did.

Knowing that increased awareness and having the right specialist support services close by would have given her back the year of her life that was lost to psychosis, Charlotte began campaigning to stop other mums having to go through what she did.