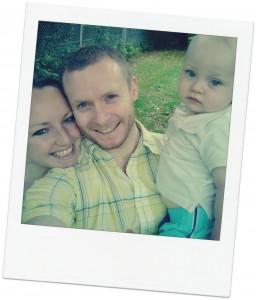 Two days after my son was born, when we arrived home after being discharged from hospital, I suddenly experienced a feeling of panic that I had never felt before. It is so hard to explain. I actually think I started to have misgivings about Joe's existence while in the hospital but the reality of how bad I felt didn't hit until I left the ward.

When we left hospital, as soon as I felt the outside air hit me, while strapping Joe into his car seat, I burst into tears. Uncontrollable tears. I couldn't stop crying. I was telling myself in my head to stop crying but I couldn't. It was as though I had no control over the tears. John asked if I wanted to sit next to Joe on the drive back to our flat. I shook my head and said no. I didn't want to be near him. We got back to our flat and as soon as we walked into our living room, I felt like I couldn't breathe. I felt a wave of indescribable panic come over me. I felt like I was being suffocated. I actually felt like I had a hand over my mouth and my mum said she noticed that I was pulling my lips. I was very scared of something.

We posed for a family photo with me, my partner and my son, Joe and my parents. In the picture, everyone looks so happy but I am in tears. I didn’t understand what was wrong. I had wanted my child so much and imagined I would be euphoric when he was born but what I felt was very, very different. My hands started tingling and my head started to pound. My head felt like it was going to explode as I had a sense of doom come over me. I suddenly felt I had made a terrible mistake in having Joe.

I felt like I couldn’t breathe. I felt a wave of indescribable panic come over me

The psychiatrist was nodding as I was speaking and made me feel like it was ok to tell him the darkest thoughts that had passed through my head. He did not seem shocked by what I was saying. He said they had seen hundreds of women who had felt like me. I said my main gripe was that I thought Joe had ruined my life. I was so anxious that he was here forever. And that my jumbled up thoughts were confusing me. He said it sounded as though I had experienced some symptoms of psychosis and said he would change my anti-d’s and I would also need to take anti-psychotics for the next few days. He then said he would be admitting me to the mother and baby unit.
That day, as soon as my assessment had finished, I went into the unit to begin my recovery. As we walked down the hallway and I saw the signs saying psychiatric wards, I was crying. John held my hand tightly and kissed my forehead. He told me he would never leave me, that he would love me forever and that I was going to get better.
The nurses were amazing. As soon as I walked into the unit, they gave me a hug and promised me things would get better. One of them gave me a folder to read which contained letters from women who had been in the unit and recovered. The stories gave me hope. And they had got better.
The unit did not look like a hospital ward, or indeed what people's perception of a mental ward looks like. There were 6 bedrooms, a lounge, a bathroom, shower room, a kitchen, and a washing machine. I was shown to my room and found that Joe would be sleeping in the room with me in a cot. I was beyond terrified - the times when I had been on my own with Joe, I couldn't cope, or at least felt I couldn't. I refused to sleep with my bedroom door closed that first night when I went into the unit. I could not bear to be on my own with Joe. However, a week later, after lots of support from the nurses , and John , who stayed with me from the moment the unit opened in the morning, until 9pm each night, I closed the door, and was on my own with Joe- and the nurses gave me a cuddle. It was a massive step for me to take and the most ground-breaking turning point in my illness.
There were nurses on duty 24 hours a day but in the unit, you are encouraged to spend time with your baby and bond. I washed Joe's clothes, sat with him in the day, looking out of the window and reading to him and when I woke up in the night having panic attacks (which were very frequent); I could go to the lounge and talk to a nurse to calm down. They also changed my anti d's. The original ones prescribed had not worked and so I was prescribed Amitriptrline - 150mg per day. I was also placed on anti-psychotics. I found these took effect very quickly. I didn't feel quite so manic and I couldn't feel my heart beating so hard.

The nurses said even though I felt like I was a rubbish mum, they had observed that I was very caring towards Joe and needed no support looking after him.

My time there was very difficult - I had debilitating panic attacks and felt scared but the help and support of doctors and nurses who understood PNI helped me on my road to recovery. The nurses said even though I felt like I was a rubbish mum, they had observed that I was very caring towards Joe and needed no support looking after him. This lifted my confidence. I think I had become overwhelmed with people/magazines/TV programmes/blogs etc. giving conflicting advice on how to be a mum to Joe. The nurses in the unit told me that how I wanted to raise Joe was all that mattered and to be confident in how I choose to do this. I was also still breastfeeding Joe. Throughout all of this, I had fed Joe solely through breastfeeding. There were times when I couldn't look at him but I still fed him. I realise now that this was me trying to bond with him, and for me, breastfeeding has increased that bond - I'm feeding Joe now and he is almost four years old.
I realised how ill I had become when John and I were allowed to leave the ward one morning to go to the coffee shop upstairs. I felt like I couldn't bear to be enclosed in a small space but had started to become scared of open spaces. We got to the coffee shop and I realised I needed the toilet. It was about a 30 second walk from the shop but I was so scared of walking to it on my own. I was shaking as I walked to it and felt disorientated.
My recovery has taken a long time. But I am better. I had to spend a few minutes on my own with Joe each day and then had to build this up to walking to the local shop. A few weeks later, I had to spend the afternoon on my own with him in the house -‘exposure therapy’. I was to then spend all my time with Joe to accept that he was here. We spent 3 months in Nottingham all together, with John having to take compassionate leave from work, to get me to a point where I could come back to London. Coming back however was problematic - as soon as the mother and baby unit discharged me from their outpatients and my care was taken over by the local mental health team in London, things turned sour.

Recovery isn’t easy but I am well, and I can function

I still to this day, almost four years after my son was born, haven’t been seen once as an outpatient at my local London mental health team. The mother and baby unit sent numerous letters asking for me to have outpatient care - but this never happened. I was very lucky that the mother and baby unit agreed to keep me on as an outpatient for a year, but this meant I had to travel up there once a week to see the doctors there - at a massive expense to us as a family but one that was essential to ensure I was fully supported while my recovery was on-going. I’m lucky I have a supportive family - I dread to think what would have happened if I had not had their support and entered the unit.
In terms of recovery, I love my son, adore him, and can enjoy life. I truly believe the right medication; therapy and entering the unit saved my life. Within a couple of weeks, I felt a small, but very definite, anxiety reduction.
Recovery isn’t easy but I am well, and I can function, and I don't think Joe was a mistake. Without knowing it, I developed a natural love for Joe. I totally adore him. He is my world. He and John, my two boys, are my life. Medication helps your thoughts to function properly again and you can start rebuilding your life. John was amazing - it must have been awful for him, but he supported and loved me all the way through. I love him and Joe so very much. When I was in the unit, I used to think the nurses were crazy saying I would get better. I thought I would be the only person to never recover. But I did of course. That was the illness talking.