The Marce Society was founded in 1980 by Professor Ian Brockington (also founder of APP’s research network). The Society promotes research into the mental health of women, their infants, and partners around the time of childbirth, and the Marce Society’s biennial conference plays host to the most cutting edge international research in Perinatal Mental Health. Dr Sue Smith, Consultant Perinatal Psychiatrist, Cardiff, first attended the Conference in 1996. She reports for APP on the differences she has noticed between then and now. 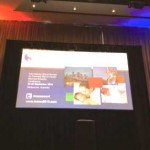 On returning from the Marcé biennial meeting in Melbourne in September I was keen to consolidate the copious notes I had made and summarise what I had learnt. Digging around in my office I found that I had done a similar exercise after attending my first Marcé meeting in London in 1996. I was struck by the similarities between what was presented and discussed then and what was still on the agenda 20 years later.

However what has changed is the number of people who are talking about perinatal mental health, the increased multidisciplinary aspect of the membership of the Marcé, the input from women with lived experience and the ‘women power’ represented by the number of recent female presidents!

It is probably fair to say that in 1996 perinatal mental health services were regarded as something of a luxury. Twenty years on despite still trying to understand the biological underpinnings of peripartum mood disorder (and I left scratching my head after some of these talks!) the absence of a service is now more of a talking point than the presence of one. In the UK the tireless work of the Maternal Mental Health Alliance has highlighted the areas where services are lacking - and the hope is that its launch globally, announced at the conference by Alain Gregoire, will achieve similar things on a worldwide scale.

Accepting that for many countries services are limited and that those attending Marcé are likely to be people from places where services are developing or have developed, it is still impressive that I heard many inspirational talks from various parts of the world including  Australia, New Zealand, Canada, USA, Portugal, Scandinavia, France, Malaysia, Bangalore and of course the UK.

A major theme throughout the conference was the importance of pregnancy and within this  a particularly fascinating talk was given by Rachel Yehuda from the USA. Her work on holocaust survivors may have demonstrated that psychological difficulties in their offspring could be related to preconception effects of trauma, passed on at conception and further developed during pregnancy. 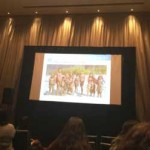 The concept "It takes a village to raise a child" was a lovely way of introducing a number of talks about how in western societies the role of the family and wider social networks in supporting women in the postnatal period has largely been lost. The challenge is how to replicate this sensitively within the networks of professionals women now encounter in the perinatal period.

There were a number of presentations about fathers and the importance of acknowledging their part in it all. It was interesting to hear about a service where dads were texted daily to ask how they were. It also reminded them to complement their wives/ partners who appreciated this even though they knew they had needed prompting to do it! It was great to see Mark Williams from Wales talk passionately about his experience when his wife suffered severe postnatal depression - though I think his "by 'ere" may have confused some people!

On the theme of decision making about and within pregnancy, it was great to hear Claire Dolman talking about the dilemmas of pregnancy in bipolar disorder and the recent BJPsych open article she did with Ian Jones and Louise Howard.

Simone Vigod from Toronto talked about a decision aid they are developing regards taking antidepressants during pregnancy. Initial results did not demonstrate a great reduction in decisional conflict but with some refinement this could be a very useful tool.

It is very unusual to see a drug company representative at a perinatal meeting but Sage Therapeutics from the USA bucked this trend by presenting their very early but potentially exciting research using allopregnanolone, a metabolite of progesterone, for postnatal depression. It is early days but initial results were promising so watch this space! 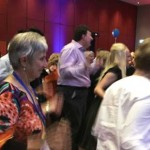 It wasn’t all hard work - the Gala Dinner was followed by us being taught how to do Bollywood dancing in advance of the next meeting in Bangalore - some of you may recognise who is getting into the swing of it all!

My take home messages were
-  pregnancy is a very important time
-  more research is still needed regards the biological underpinnings of peripartum mood disorders as every answer we get provokes another question
-  remember the dads
-  a lot of people care about this field including those with the power to do something about it i.e those with the purse strings - so we have to keep nagging!
- roll on Bangalore 2018