In May 2021 I was diagnosed with postpartum psychosis following the birth of our triplet baby girls. I had been hospitalised directly after the planned c-section and kept in hospital with my babies for twelve days. I had very little sleep as the babies were feeding on average every two hours by feeding tube. This resulted in me suffering with exhaustion - a dangerous level of exhaustion in my opinion! Looking back, I think my psychosis started not long after giving birth, as my consultant explained postpartum psychosis can come on soon after the placenta is removed. In my case I had not one, but three impressively sized placentas!

To begin with I was acting unusually elated, adrenaline-fuelled yet detached from the whole experience of childbirth. For the first eight days I was using social media in order to update everyone about the triplets and was hardly ever off my phone, even when I had three babies to admire. After this time I became withdrawn and absconded from social media, I failed to reply to messages and even rejected my family and friends. I became petrified and anxious every time my wife left me alone in the hospital, and I was fixated on being alone all the time. On one occasion, I became extremely tearful when my daughter had her feeding tube reinstated and I was crying constantly and focusing on the miscarriage we had the previous year. 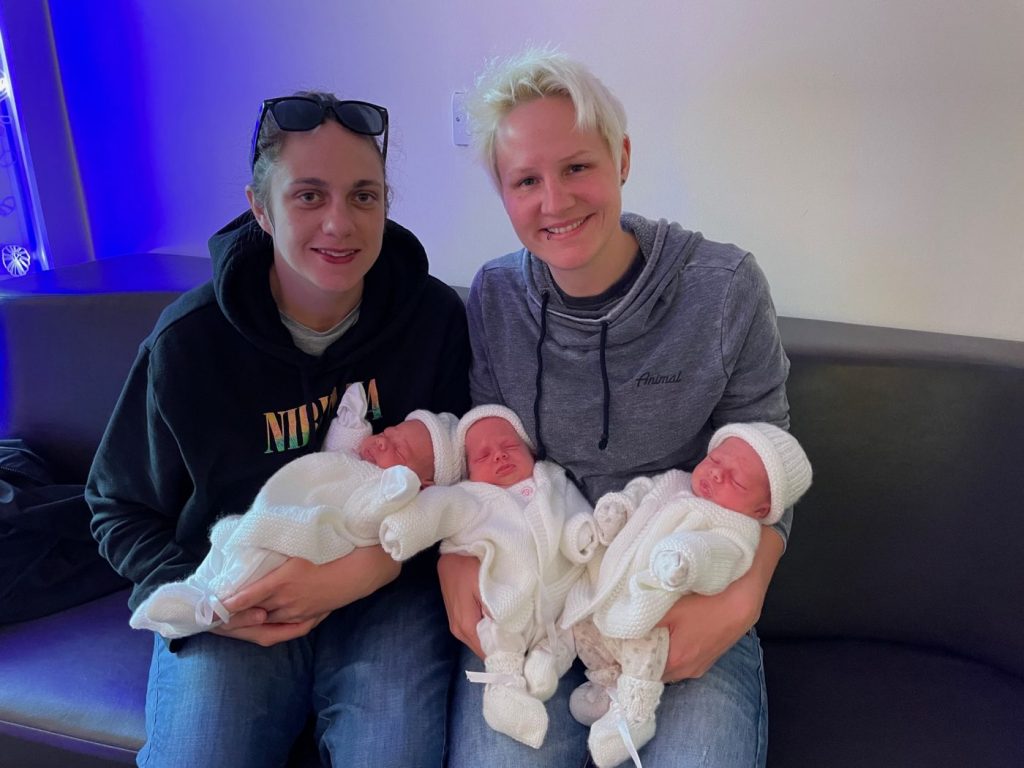 Things started to get much worse however, and I became obsessed by the idea that the doctors and midwives thought I couldn’t look after my babies properly. I’d convinced myself they thought I was ‘mental’ and that they’d take the babies away from us.

On Easter Monday we were finally allowed home and, unlike me, I didn’t tell a soul. Sadly, what was supposed to be a joyous occasion turned to disaster. We were suddenly without the support of the hospital with three 4 lb babies equipped with feeding tubes and with very little sucking reflex. I was petrified. I had extreme anxiety, constantly worrying about the babies dying, how to feed them, how to get them in to a routine, and I was still obsessed about being left alone. I’d ask the same questions over and over, I’d run around the house panicking and doing tasks that didn't need to be done like writing down every tiny detail such as ‘shake bottle with lid on’. I simply couldn’t undertake simple tasks without my disorganised scribblings in front of me.

I became a shell of the strong woman Sarah had married.

At this point I asked the doctors for anxiety medication, presuming what I had was some sort of postpartum anxiety. As I rapidly went downhill I asked Sarah’s mum (a former nurse) to move in with us, but then became obsessed that she’d leave me on my own and, perhaps even more worrying, I started believing that her dog would eat my babies!

I just couldn’t switch off. At night time I barely slept, the babies’ cooing and lullabies going around and around my head. I was panicking about the babies nonstop - wondering if they’d die in the night.

I had paranoid thoughts about my medication, thinking it was being hidden one minute, then believing I was being drugged the next. I was obsessing over magpies and robins in the garden too, and would look out the window in order to find two magpies - because if I saw one, I’d assume death was coming. I would freak out when the babies were being bathed, I’d accuse them of bathing them without me then switch to saying they’d not bathed them.

I’d stopped eating and barely showered. The one time I managed a bath I tried to scald myself just to ‘feel something’, and I became fixated on Nirvana lyrics and Kurt Cobain’s famous quote “it’s better to burn out than fade away”. I’d wear my Nirvana hoodie constantly as I believed it was symbolic. I started telling my family about previous depressive states when I was young, self-harm and an assault - secrets I'd kept all my life were pouring out of my mouth and I was unable to stop it. I just wanted the pain to stop and to be me again.

As time went on I had contact with the perinatal mental health team who came to see me urgently after my family informed them that I had said I wanted to go out and ‘play with the traffic’. When the nurses came to assess me they could see just how paranoid I was. I told the nurses that I needed to go somewhere safe, and it was decided that this would be a mental health hospital as I didn’t want to go to a mother and baby unit (MBU) and take the babies away from Sarah, the closest MBU being many miles away. Sadly, there was no space for me at Longreach or Bodmin Hospital at the time so it was decided I’d remain at home on sleeping tablets as home was my ‘safe place’.

As the days wore on I was convinced everyone was talking in code and that they had a conspiracy against me. I thought people were talking to me through the babies and through animals. Then, I ran away from home and hid in the woods for a while, returning in floods of tears and telling Sarah that I needed help before I hurt myself. I was suicidal.

Sarah was straight on the phone to the out of hours team and my sister came to our home to try to calm me down.

They assessed me and finally found me a bed at Longreach Mental Health Hospital so I was driven there by the AMHPs that night, in the early hours and voluntarily admitted.

Hospital was scary and my paranoia was through the roof. I was put on antipsychotics and slept on and off for three days straight whilst meeting numerous doctors. I was also anaemic and lacking in folate, which in itself can cause confusion.

I was seriously ill but no-one I knew had heard of my diagnosis Postpartum Psychosis – and I had Postnatal Depression chucked in on top of that too just to complicate things. There were also discussions around possible PTSD from our miscarriage and from some previous bad experiences.

I remained at Longreach for two weeks, my visits with my wife and triplets had to be supervised, and I was given four meals a day to help me put on weight as I’d lost so much. My psychosis continued and, in addition to the paranoia, I had hallucinations, too.

Now, 13 weeks after going home on a week’s leave, and with the right support and medication, I’ve really turned a corner.

Postpartum psychosis is now something I accept and I know now that it isn’t a life sentence – although it does put me at higher chance of getting it again in pregnancy (not that I need any more kids!) and of relapse in the future.

I remain on medication for my diagnoses and am currently being supported by the wonderful Perinatal Mental Health team, the Early Intervention for Psychosis team and I undergo Cognitive Behavioural Therapy once a week.

Although there are still bits missing from my story, I hope that my experiences will help other people and one day I will explain to our three miracles what had happened to me. I just want them to know that I was there in their early days - even though I wasn’t all there.