My first experience of psychosis was back in 2009. I was in my last year of university and really struggling with the pressure of studying, my placement and writing up my dissertation. I stopped sleeping for several consecutive days and I just couldn’t shut my brain down.

I was talking really quickly, and became quite aggressive and reactive, shouting in the workplace because I believed people – and even at one stage a cloud – were following me. It wasn’t long before I was sectioned.

It turned out I had experienced a psychotic episode and I was eventually diagnosed with bipolar disorder. I had treatment and psychotherapy and, for many years, I was fit and well. 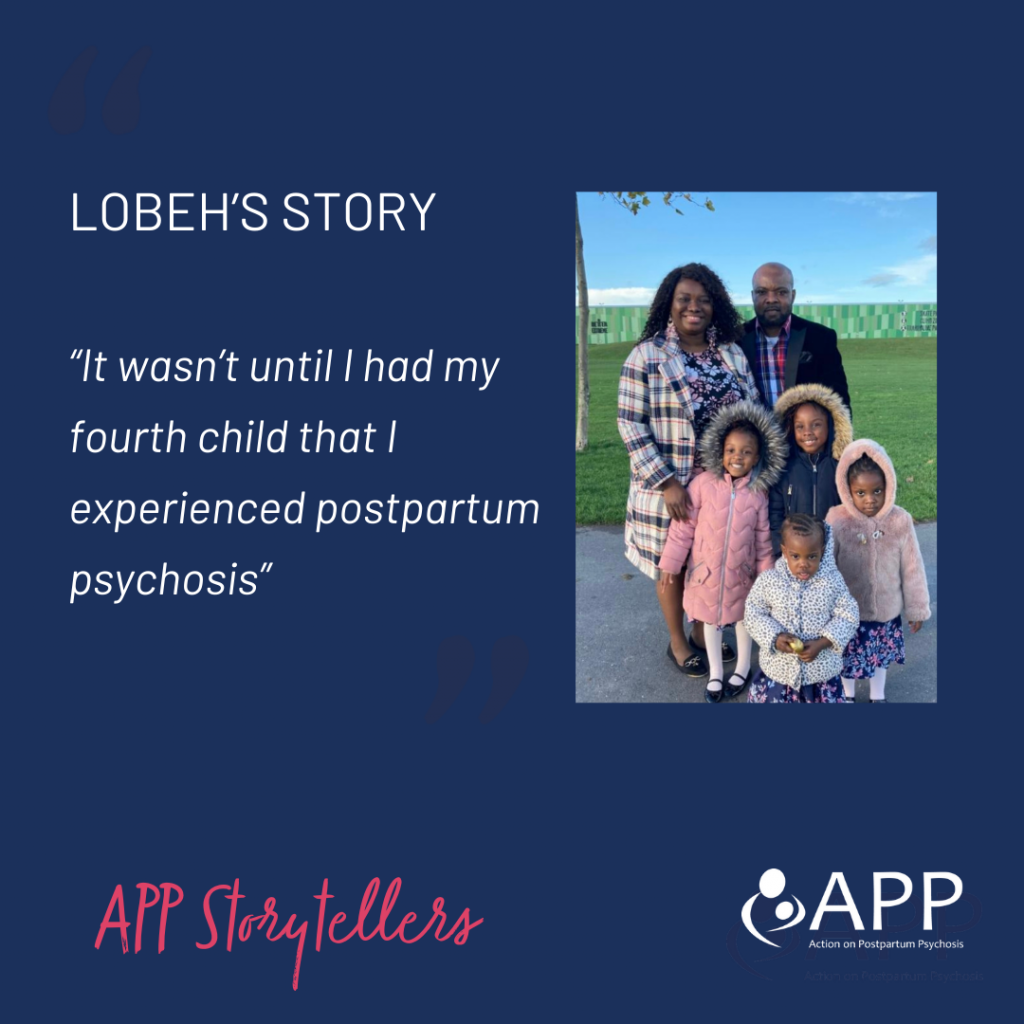 I met my husband in 2012 after I’d qualified in my profession. Everything was going really well, we married had our first child, then our second, and I was still really well.

When I had my third child there were some indications that my mood was changing and that I was going through some hormone imbalances, but I didn’t experience another psychotic episode until after I had my fourth child in 2018 – nine years after my previous episode of psychosis.

Because of my bipolar disorder, I always knew I was high risk for postpartum psychosis. However, having had three children with no problems, I really wasn’t expecting it to happen. Sadly, though, there were lots of complications and trauma around the birth of my fourth child and I ended up having an elective c-section.

When my baby daughter was born she wasn’t breathing and needed resuscitation which meant that we had no body contact as she was immediately rushed off to intensive care. I was fit and well at the time so was officially discharged but I didn’t want to leave my baby so they allowed me to stay. Within two weeks we were discharged together.

The problems didn’t end there, however, and after a few days at home I experienced fits and, as these were markers for an infection, I was rushed back to hospital where I had to undergo more surgery. They found that some of my placenta had been left inside which had caused the problems.

Once the physical risks had subsided I returned home. This is when the symptoms of postpartum psychosis hit me.

Three days after coming home I started erratically gathering items from the home to sell at a car boot sale – I felt compelled to do it, even though I had just come home with my baby. My attention was so often diverted away from my baby and, as a result, I wasn’t caring for her properly. Sadly, I had lost all sense of reality and I didn’t really understand what was happening or what I was supposed to be doing.

I believed that people were trying to take my baby away, I was driving around disorientated for hours with no idea why and constantly collecting these items to sell. Every day it was as though I woke up on a mission, it was as though something else had control of my mind. I was completely confused, lost all inhibitions, was over thinking and over talking. I would find myself in places or doing things with no idea how I had got there.

My husband tried to support me and he sought medical help and spoke with other members of the family. But the problem was, it’s hard to detect postpartum psychosis because how can you know what is normal behaviour after having a baby? It’s only when it becomes really erratic that it becomes more apparent – and at that stage you always need emergency care.

Eventually, having travelled out of my area and being filed as a missing person I was found in an apartment and sectioned.

Why MBUs are so important

I was brought straight to a hospital, however, there weren’t enough beds in nearby Mother and Baby Units (MBU) so I ended up on a general psychiatric ward and separated from my baby. Unfortunately, when you’re separated from your child this can really trigger more paranoia and make things worse.

I was also really scared on the ward which I don’t feel was managed very well and I had a particularly difficult time there. I had just had two major surgeries and some of the women on the ward were incredibly unwell. I got into a disagreement and I remember being kicked and punched. I was found unconscious and sent to A&E.

After I had been on the ward for a month a bed in a Mother and Baby Unit came up, but it was so many miles away from my home and family. MBUs are imperative for the safety and welfare of women who have just had children, and if I had been offered a place closer to home I would have accepted. But as this was so far away I petitioned through a tribunal to instead be discharged.

How I found recovery

Every woman has a different experience when it comes to treatment and recovery. In my case, I received antipsychotic medication to alleviate some of the psychosis and then, as I started to come round from the confusion, I started talking therapy to explore how I felt and what had happened. It enabled me to talk about the trauma of the birth which had obviously affected me greatly.

Because I wasn’t with my baby I missed out on some of the bonding time during my recovery so lost my confidence as a mother which was really hard. I also fell into a depression which was really challenging too. Recovery is gradual, and having the therapy and my family and friends around me helped a lot – as did my faith.

I also found lots of help through APP. When I first Googled postpartum psychosis and APP came up in the search, I felt as though I was the only woman in the world going through this. But when I was introduced to the peer support forum I realised that there were many women who had experienced this illness. I joined the monthly meet ups and it was fantastic being able to support and be supported by other women. I am especially pleased that APP is proactively encouraging engagement from BAME communities because mental health is such a taboo subject in some of our communities, so having more knowledge, awareness and engagement is key.

And that’s why I’m sharing my story today. I hope it inspires other women to feel confident in coming forward and asking for help.