One mum shares her story of recovery to inspire hope...

If you were to ask my best friend a word to describe me, she will for sure say ‘anxious’. It’s a part of me that I’ve always carried and of course it showed up during my pregnancy too. I kept thinking ‘is the baby ok?’ ‘is the baby moving?’ But overall, everything was going fine…that is until the end of February 2020 when COVID-19 starting spreading across Europe. For me, being pregnant and away from home meant only one thing; there was no way my family would be able to be with me for this amazing moment in my life.

At 41 weeks of pregnancy, on 27th May, my little boy decided to make an appearance. I read a lot about people giving birth after pushing for ten minutes or an hour, but that was not the case for me. I don’t want to go into all the details of my birth, but to summarise we had a fair few complications and I felt completely traumatised by the end of the labour.

The days in the maternity ward proved to be more difficult than I had anticipated. I was in a foreign country with no knowledge of the standard hospital procedures, and this unfortunately created lots of unnecessary confusion and uncertainty. Nonetheless, the biggest challenge was taking care of the little one as I had never held in my hands such a tiny and precious human being. 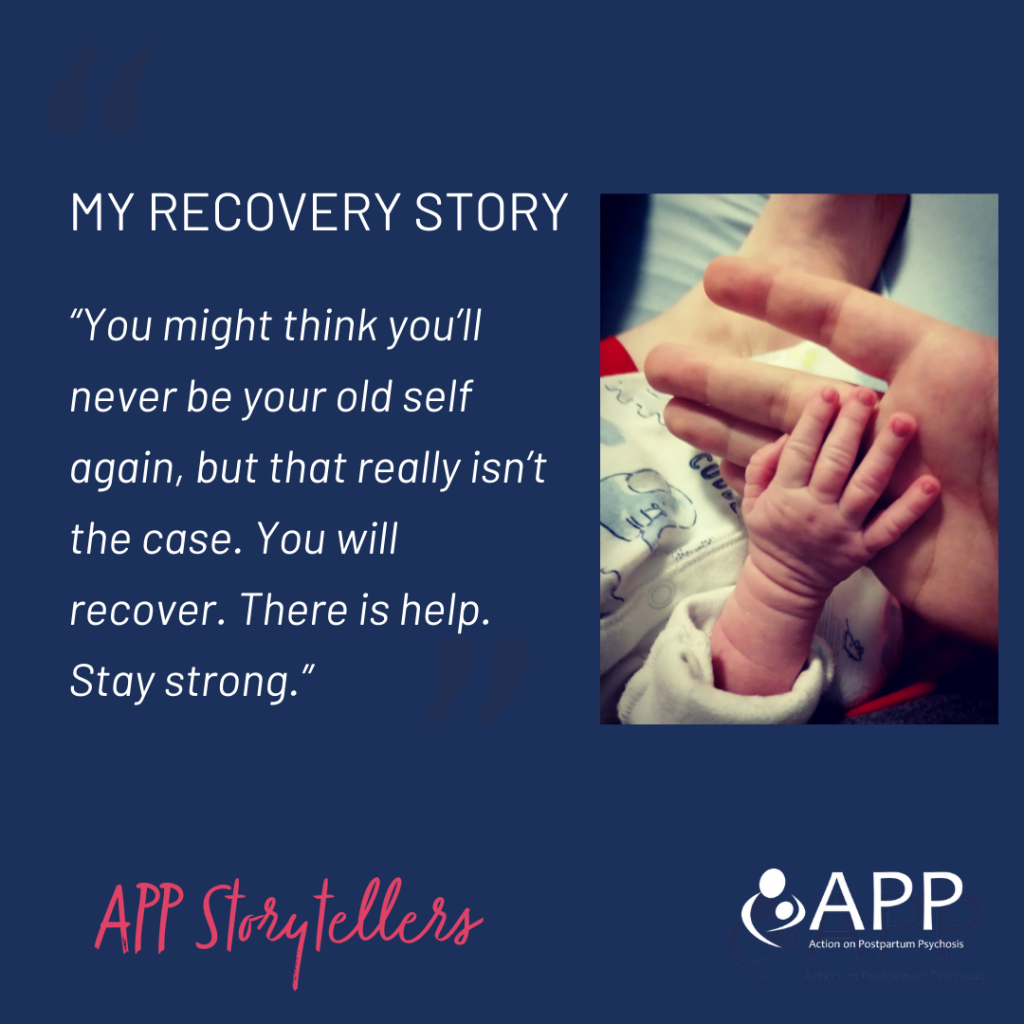 My little baby decided to show his character from the beginning: he didn’t want to be forced in doing something he didn’t want to do (like his mum), which sadly included breastfeeding. We tried for a week to get him to latch, but he was crying so much that the whole process made me really really upset. Breastfeeding was not going to work and that left me feeling really guilty - I felt that I was not able to do the one thing I was supposed to do as a mum. I felt like a failure. It was only after months that I realised that a fed baby is a happy baby regardless of how they feed, and that a mum simply needs to be loving. The rest didn’t matter – I was doing my best.

I had a terrible feeling of doom, and I thought I was dying

On the first day back, the midwife came to check on the little one and, despite assuring me that we were doing everything correctly, my anxiety didn’t leave me. I ended up having a major panic attack and I feel that, looking back, this is when the psychosis also began.

During the panic attack, I had a terrible feeling of doom, and I thought I was dying. It felt as though my entire body was shaking despite my legs remaining completely still as stone when I looked at them. An ambulance came and I was taken to A&E. I spent a few hours there and everything seemed fine; they discharged me and suggested I get in contact with a perinatal mental health team. Little did they know that they would see me again in less than 24 hours…

Once I arrived back home after the first trip to A&E, things started quickly deteriorating. I really wanted to sleep but I wasn’t able to close my eyes. I began feeling that everything around me was unreal. My husband took me on a walk to show me that everything was just as it always had been, nothing outside had changed, but it didn’t convince me. My mind wouldn’t stop racing and at one point I convinced myself that I was in a coma – perhaps from the panic attack or from the birth – I wasn’t sure I just felt as though I was in another state and that the doctors were trying to communicate with me through computer simulation.

My head was spinning and I kept thinking I needed to pass levels – as though I was in a computer simulation - in order to stop certain situations playing over and over in my mind. It was only when a friend came to visit that she realised something was very wrong and a second ambulance was called resulting in another trip to A&E.

We spent 24 hours in A&E but the situation kept worsening. I was highly paranoid and kept repeating: Is the baby fine? Am I fine? Are we going to be ok? Why me? I was also really worried that I could have harmed my baby as I was not able to take care of him properly.

During this time, I truly convinced myself that I was indeed in a computer simulation. It also became clear that I was having hallucinations. It was as though I was projecting my feelings onto other people’s faces and I thought I could see my husband and the doctor crying, but when I asked them about it the tears suddenly vanished and their faces returned to normal.

It was at this point that another doctor came into the room and diagnosed me with postpartum psychosis.

I wasn’t scared of the diagnosis – I hadn’t heard of it so the name of the illness didn’t mean anything to me. But I was terrified by what I was experiencing and I just wanted it to stop. As things continued to deteriorate fast they made the decision to section me in a Mother and Baby Unit (MBU) which ultimately saved my life.

I had never heard of an MBU and I am not sure they actually exist in my home country.

MBU’s are psychiatric hospitals for mothers like me experiencing severe mental illness. They are a place you can recover keeping the baby with you the entire time. These are amazing places and the doctors that work in there are fantastic people; I cannot praise them enough.

The first day in the MBU was hard as I was still convinced I needed to reach my next level in the computer simulation, and that to do so would save me from being trapped in a coma. A doctor came to explain to me that I was experiencing psychosis and that I would need to begin taking special medications that same evening.

Both the medicine and the ability to sleep for an entire night helped enormously in my recovery. Indeed, the day after, I had a short psychotic episode but it lasted only 10 minutes…and I’ve never had once since then!

Time flew by in the MBU: I gained confidence with my baby and I also met some lovely mum friends, all of who were clearly experiencing their own battles (I wish them all the luck for the future).

My recovery went so well that I was discharged within three weeks, followed by home support from the perinatal mental health team. Coming home was scary and daunting but my husband and my family where there to support me (luckily my family managed to find a flight to reach me). I had ups and down at the beginning. I felt ashamed, sad about my illness and devastated about not being able to breastfeed. Nonetheless, I had my baby there with me and we had a beautiful bond. Everyday I was showing myself that I was in fact able to take care of that little human being and that really boosted my confidence. He was smiling and happy and that was all mattered to me.

After a few months had passed since my discharge from the MBU, the medication was stopped and I am happy to say that I am back to being the old me (and actually less anxious, which is better than before!) This month is going to be my baby’s 1st birthday and life couldn’t be better!

I wanted to share my story to show that postpartum psychosis is indeed a severe mental illness but you can recover very quickly with the right help. Reach out for help and, although you might think you’ll never be your old self again, that really isn’t the case. You will recover. There is help. Stay strong.