My partner, Arina, was only in the MBU for a couple of months when she was discharged. It wasn’t that she was well enough to come home, it was because they said she wasn’t making any progress. Our baby had already been discharged, and I had taken time off work to be a full time parent. But then when Arina came home as well, I realised that there was no more support available to us and I had to leave my job as an ambulance care assistant – something I had worked so hard for. It was December when Arina gave birth to our daughter. I hadn’t realised that there was anything wrong at first. Our baby cried a lot, and we were told she had reflux so Arina was naturally anxious and, because I’ve got three older children, I just put it down to it being early days.

Arina had struggled with mental health problems prior to giving birth, and she had been diagnosed with BPD (borderline personality disorder) which is a serious mental health issue that can cause overwhelming, distressing and changeable emotions.

When I was due to return to work after our baby daughter was born, Arina mentioned that she was feeling really anxious. It was New Year’s Day and, because I was expected in work on the 2nd, I contacted Arina’s sister who lived a couple of hours’ drive away to ask if she’d come and stay, which she did. However, she contacted me at work saying she was concerned about Arina who was really struggling and distressed, and she suggested she could take the baby for a couple of nights so that we could get Arina some help.

I reluctantly agreed, and we contacted the crisis team, who came out to see Arina but they weren’t very helpful – simply suggesting that she take a bath, have a cup of tea and get some sleep. But the problem was she couldn’t sleep. And I could see that she was incredibly vulnerable.

We were due a visit from our health visitor so I collected our daughter from Arina’s sister’s and brought her home. I was at work on the day of the visit, but they called me and said I needed to come home otherwise they would need to remove our daughter. They felt that it was unsafe to leave Arina and the baby alone as they suspected Arina had postpartum psychosis. I went straight home as they tried to find an MBU to get the care Arina clearly needed. However, it was a real struggle because the crisis team maintained that she didn’t need help.

Eventually, we managed to get Arina in to see the GP – she was incredibly anxious by this point. The GP agreed that Arina needed help and, the following day, we finally got the call saying that she could be admitted to the MBU.

Because of Covid, I literally had to drop Arina and my daughter at the MBU door, which was heartbreaking. Leaving your partner and daughter, not knowing how they might settle in or where they were going to sleep, was really difficult. I had also developed a really strong bond with our baby so it was difficult being separated from her as well having previously spent 24 hours a day with her.

The MBU was about a 45 minute drive away from our home as well, so I was having to work full time and travel every day for the one hour a day visit, and it was emotionally and physically draining.

After about a month, I was shocked when the MBU suggested our daughter should come home with me. Arina had mentioned that the MBU staff were still carrying out most of our daughter’s care, and they suggested that Arina needed some time on her own. I was worried because I needed to work to bring the money in, and also because I thought Arina should have the opportunity to bond with our daughter.

I arranged time off work, thinking it was just for a few days but, as time went on, nothing was mentioned about any plans for our daughter to return to the MBU. I was taking her back and forth every day to see Arina and then looking after her the rest of the time on my own.

I had been working with the Ambulance Trust and had only just started the job in the October, so I was devastated at having to take so much time off. Eventually, I was told by the MBU that Arina needed to be referred to an adult psychiatric ward for further treatment but that they couldn’t find a bed, so she would need to come home. We were told at that point that we would get some childcare support to enable me to go back to work part time but nothing materialised.

So, after two months in the MBU, Arina was also home, and I left my job and had to claim benefits to keep us going. Arina applied for PIP (Personal Independence Payment) but that was eight months ago and we still haven’t got it so we are relying on basic benefits – other than £5 a week for baby class. We just feel as though we have been left completely on our own. 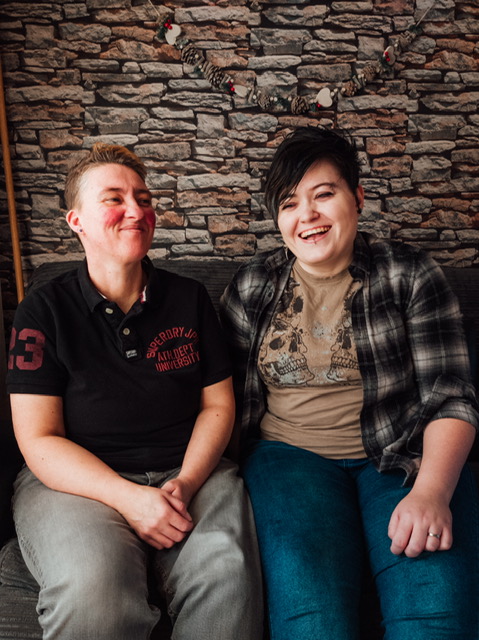 It’s quite difficult, as a same sex couple, to access support because everything for partners seemed to be targeted at ‘dads’ or ‘fathers’. I couldn’t see anything that felt it might include me. However, during a conversation with an old friend who I discovered had herself been in an MBU, she told me that she’d seen a story on the APP website about a same sex couple so I had a look straight away and reached out to Ellie from the peer support team.

Since meeting Ellie, I’ve been put in touch with another female couple and we’ve been in contact regularly, texting back and forth, and it’s been a lifeline. It’s just so good to have someone you can actually relate to.

There are still challenges we are facing because of our situation though. For example, because I’m not on the birth certificate I have to adopt our daughter, so being classed as a full time parent I currently have the responsibility but not the legal rights, so I can’t even open a bank account for her or register her with a nursery. This is really tough because Arina is still struggling with her mental health as well. And, on the flip side, the social workers have told us that, once I adopt my daughter, they will no longer be able to support us at all – so it feels like a lose-lose situation.

The thing that keeps me going, however, is reading the stories of others, and speaking to Ellie and the couple that APP put me in touch with. While everyone’s experience is different and unique, there is always something you can relate to. It makes such a difference knowing that you’re not alone.