Looking at my daughter, I was convinced that someone was playing a trick on me. It was as though this vulnerable little baby wasn’t mine. When I looked at her, I felt completely dissociated from her. So when people called me ‘mum’ I was consumed with guilt – because I didn’t feel worthy of being called a mum - I didn’t believe I really was one.

In hindsight, I was already a bit unwell before I gave birth. I’m diagnosed with BPD (borderline personality disorder), so I do struggle a lot with my moods and negative feelings towards myself. When I think about the last couple of months before giving birth, I was definitely feeling more afraid and less excited than I should have been. My partner, Nicola, was really enthusiastic, decorating the nursery and looking forward to welcoming our new baby in our home. But I just couldn’t get my head into it. By the end of week 37 I broke down to my midwife, telling her that I couldn’t handle it anymore, I couldn’t cope.

After being induced and giving birth, something didn’t feel right. I had my new baby crying on my chest but instead of feeling the love I was hoping to feel, I felt suspicious of her and completely overwhelmed.

When Nic went back to work I really struggled. I had this awful feeling that there was a demon inside of me and I kept thinking what if I do something to hurt me and the baby? What if I’m a killer but I just haven’t killed anyone yet. Because of this, I was terrified of being alone with her and I counted down the hours until the health visitor came so I could put my baby safely in her arms for protection. I never did anything to harm her – but the fear that I might plagued me constantly.

By this point, the crisis team had already come out to assess me, because I was really suicidal. They concluded I should take a hot bath and have a cup of tea. That was their words. But when the health visitor and social worker came, they noticed straight away that I needed help. I was crying my eyes out, rocking back and forth, shaking and trembling. I handed my baby over to them and begged them not to leave me alone with her. They called Nic and asked her to come straight home from work and set about trying to get me some emergency help.

I saw my GP, who said I was so unwell I needed to be admitted to a Mother and Baby Unit (MBU). And then I was assessed over the phone by a psychiatrist who also said I needed to be admitted. But the crisis team were adamant that I didn’t need admitting – so we spent a whole day battling with the crisis team, asking for help. Finally, a bed was found and I was able to go to an MBU nearby.

Unfortunately, this only marked the beginning of a long battle for care and support.

I was incredibly unwell when I was first admitted. I began believing I might be pregnant again, thinking that the nurses had impregnated me with a syringe. I was suicidal and tried to take my own life. Even so, while I still wasn’t bonding with my baby, I was very slowly progressing day by day. But I felt under pressure to do better and I hated myself for it. Although I was really unwell, they kept talking about sending me home and I kept fighting to stay. I had only been in there for a month, but they eventually told Nic she had to come and take our baby back home which I found odd because we hadn’t had chance to properly bond yet. 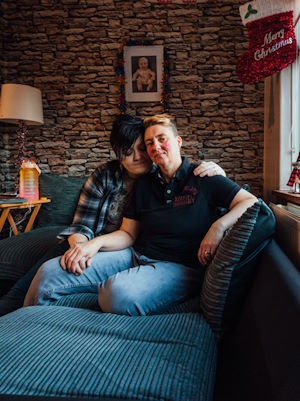 Because of this decision, Nic had to leave her job and look after our baby. We had no income. Nobody helped. Nobody kept their promises. We were even told that I should be sent to a general psychiatric ward and if Nic couldn’t look after our baby she would need to go into foster care. I couldn’t understand it. There were six beds in the MBU and only three of them were filled. And we’d only been there a month.

They said I wasn’t making proper use of the service – it was as though they’d lost all hope in me. I’m sure if they let me stay a bit longer I could have got better more quickly.

I didn’t go to an adult ward because they said there were no beds. So I stayed in the MBU for four more weeks, without my baby, and then they discharged me. But I was still very unwell.

Since coming home the crisis team also discharged me (after just two weeks) and we have been left alone to cope. We are still battling, and I still can’t take care of our baby full time and Nic s still unable to work.

I’m trying my hardest mentally and physically, taking all the tablets, and things are improving a little. My new antipsychotics have definitely helped a bit, as I haven’t got the constant darkness hanging over me, and I started going to decider skills therapy which is helpful. But the more stressed I get, the worse the psychosis gets, and the situation we currently find ourselves in is incredibly stressful.

Nic is struggling with her bad back, and has had to give up her job, so I look at her and think she’s like some sort of superhero. She’s so capable, she just keeps going and she’s like my rock. I don’t know what I’d do without her. I just hope we can get some more support so that we can both start to recover and re-build our lives as a family.