Unravelling Eve is a ground breaking, mixed media art project supported by APP and funded by The Wellcome Trust. A three-year collaboration between academics, artists, journalists and women with lived experience of Postpartum Psychosis has resulted in a radio documentary and short film, which bring the often unknown and misunderstood illness Postpartum Psychosis to life.

In the throws of a psychotic episode, individuals commonly demonstrate bizarre and alarming behaviour, delusions and hallucinations dominate the mind, dictating uncharacteristic behaviour. Once recovered, patients often reflect back on their illness with great shame, guilt and embarrassment. The traumatic memories etched during these episodes often render individuals silent and many are never able speak of that terrible time again.  Unravelling Eve has provided women who have suffered from Postpartum Psychosis with a rare opportunity to meet others who have recovered and enabled them to speak out about their experiences to break their silence.

Leading Perinatal Psychiatrist Prof. Ian Jones, Dr Jess Heron, Sarah Stock and Clare Dolman worked with London based conceptual artist Joan Molloy to help her gain a rich understanding of PP and the profound effect it has on those who experience it.

Joan began by visiting Ian and his research team at the Neuropsychiatric Genetics and Genomics Centre at Cardiff University to learn about their work on the genetics of the condition. ‘It was so interesting to visit the labs, to find out how the blood samples are analysed and to learn about the remarkable advances being made,’ said Joan.  ‘I even had my own blood taken and analysed, which was fascinating.’ 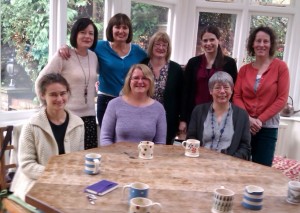 In July, APP members who had suffered psychosis after the birth of their children, met with Joan and Ian to openly discuss their experiences at a workshop in a South London hotel. Journalist Clare Dolman, Chair of Bi-Polar UK and APP Trustee, facilitated the day-long workshop. She found it a very moving experience to hear women talk openly about what had happened to them and how it had changed their lives. There were some tears when recalling being separated from their baby or the overwhelming confusion and isolation of suddenly finding themselves in a psychiatric hospital, but there was lots of laughter too. “It was the first time I have ever spoken to anyone else who has also had Postpartum Psychosis,’ said Ceri, ‘It was a very special day”.

Read a participant's account of taking part in the workshops» 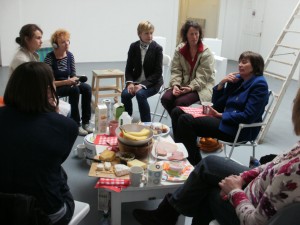 From the discussions at the workshop a radio documentary was produced and broadcast on BBC Radio 4. The content is a skilful navigation through all aspects of the illness combining first hand and sometimes heart breaking personal stories with scientific theories. Clare Dolman who has first hand experience of the illness presented the thirty-minute documentary. Difficult topics were taken head on in the candid discussions revealing an insight into Postpartum Psychosis unseen before.

The radio program was extremely well received by people from all backgrounds and interests; it opened many channels of conversation with APP. Many, including friends and family of those supporting women with the illness, expressed gratitude and thanks to the brave women who took part in the workshops. Ian Jones said, 'I was delighted to have participated in the arts project and in the fantastic programme on Radio 4. It was great that our work to understand the triggers of Postpartum Psychosis was exposed to such a large audience'.

Subsequently, Joan Molloy and cinematographer Arnold Borgerth, created an artistic film, Unravelling Eve, to visually represent the content of the radio documentary. The film spans the whole spectrum of Postpartum Psychosis, combining voice over and visual imagery to take the viewer inside the mind of a woman with PP. The voices of the women describing their symptoms, treatment, memories and recovery are interspersed with atmospheric Spanish guitar music. The film debuted at this year’s Marcé conference in Swansea and will be used to provoke a broader discussion on the many different aspects of the illness and its repercussions. The film will be used across multi media platforms to raise awareness and support discussions on the future of Postpartum Psychosis, more effective diagnosis and treatment.

Read a personal account of the participants' film viewing»

The Unravelling Eve project, in all its guises has been a wonderful opportunity to help establish a voice for an illness that is largely misunderstood or unknown. Many participants travelled great distances to take part in the workshops and this important project. Everyone felt they had benefited from being able to share their experiences with such candour and were glad to contribute to the public understanding of PP. APP is extremely grateful to all the courageous women who took part and chose to speak out, share their stories and finally, break the silence.