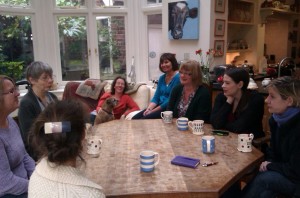 On a dreary Saturday in November, eight of us who had attended the original workshop “Unravelling Eve” braved the rain and rugby crowds to meet up and see the long-awaited results of Joan Molloy’s work. APP trustee Clare Dolman, who facilitated the workshop over two years ago, kindly hosted the event.

It was wonderful that we could meet up again and it was hard to stop chatting! The atmosphere was decidedly relaxed, in marked contrast to the harrowing first workshop when we had shared our personal experiences of  Postpartum Psychosis. We were eager to see how Joan had used our stories.

Joan admitted that she had been “disabled” by what she had learnt from us at the first workshop. She then faced the daunting task of repeatedly listening to the recordings made that day. Joan met the challenge as both mother and artist, and has taken great pains to use the material in a respectful and sensitive way to create a meaningful fusion of our experiences.

The result is a ground breaking 15-minute film, as well as some panels and sculptures which, unfortunately, we did not see as they were not transportable.

The film is powerful because it is spoken by us, not actors. We are proud to put our names in the credits. We want to banish the stigma of Postpartum Psychosis as a mental illness. Everyone made a difficult decision to take part.

Unfortunately, the nature of the illness goes hand in hand with regret about feelings and actions. We have all been incredibly brave to confront the past and the emotional pain that we have experienced (and might still be experiencing) to help others to understand PP.

Joan was concerned that we were happy with the content. It was an enormous challenge to retain the integrity of the film without compromising individuals. Our candour and honesty has been treated with trust and sensitivity.

Joan divided the film into sections, to help signpost the viewer, using repeated shots of a hand unravelling a string from an unseen bundle. She also used some photographs of us, our children and our mothers. The clarity of our voices, spoken with confidence and obvious emotion, was compelling.

At the crux of the film was the question “What is it to be a mother?” Joan uses thought-provoking images, as well as varying filming speeds (particularly effective were the accelerating rose petals, which emulated one hallucinatory experience) and a busy, insistent original piece of music written for classical guitar.

The film does not make easy viewing.

We hear details about hallucinatory experiences, attempted suicide … and the crippling of the emotions leaving sufferers incapable of bonding with their child. PP is a cruel illness. Once the psychosis, mania and hallucinations have gone there is a long period of recovery, characterised by various forms of depression, and feelings of guilt.

It also raised the worrying fact that symptoms of PP were often missed by healthcare professionals.

Moments of awful truth are laid bare; when the mother realises that she cannot look after herself so is unable to care for her child. Someone else wonders if the baby was better off without her (the mother).

Joan used images symbolising the continuum of children’s lives; a two pairs of worn shoes, and Lego near an open door. The film reaches way beyond the time when PP makes its initial impact.

At the first workshop, Joan had provided pastels and paper and invited us to draw how we felt during an episode of our illness. She used these pictures to great effect. The disembodied hands frantically rolling and unrolling them captures inescapable anxiety, while showcasing the different traumas we had depicted.

At the end of the film we sat in silence, moved by the result.

For all of us, this project has been emotionally draining, but hopefully cathartic and part of a larger healing process. We hope that this film will reach a wide audience of midwives and other health professionals, as well as anyone interested in the illness.

Our stories were remarkably different, and our interpretations of the film were also varied. Stills shot from different angles of a pair of soft toys, one of which lay under a coverlet while the other looked on, evoked emotions of caring and love, as well as confusion and hilarity!

Particular poignancy was achieved with the rotating close ups of older children, while the speaker explained that feelings of love for her baby came much later. The mother’s hand caressing the child’s hair became unbearable to watch for some of us; the automatic gestures of motherhood have had to be learnt, or may remain yet to be fulfilled.

The film was not designed as a documentary, but managed to cover many aspects facing sufferers and those near to them. Often, relatives find it difficult to cope with the changed person, and not everyone has the support of their family. It was commonly agreed that the best care is offered by Mother and Baby Units, where specialist nurses can help women bond with their babies while they recover in a safe and appropriate environment. The shots of an unpeopled MBU implied that there is hope with such support. Recovery is not achieved by “pulling oneself together.” As the film suggests, it is a painstaking journey requiring professional help but a hopeful one.

We share a unique bond in having helped to create Unravelling Eve, and the warmth and empathy that has come of the project is something that I shall treasure indeed. It was a privilege to be involved in this project. Thanks especially to Joan for her absolute dedication in producing this incredible film out of deeply personal glimpses into an illness which is often misunderstood. I hope that we shall all keep in touch.