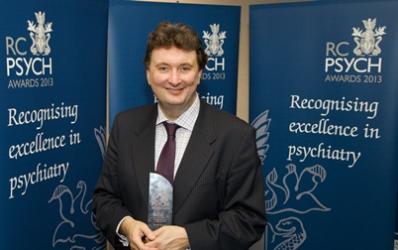 APP’s Chair, Professor Ian Jones of the National Centre for Mental Health at Cardiff University, has won a major prize at the fifth annual Royal College of Psychiatrists Awards.

Professor Jones, who is Deputy Director of the research centre and an Honorary Consultant Psychiatrist in Cardiff and Vale University Health Board, was awarded the Psychiatric Academic / Researcher of the Year prize at a ceremony held at The Royal Society of Medicine in London.

The awards mark the highest level of achievement within psychiatry, and are designed to recognise and reward excellent practice in the field of mental health.

The judges said: ‘Ian Jones is a model clinical academic psychiatrist. He combines international excellence in his research, teaching and clinical work, with a strong commitment to public education and the development of the profession of psychiatry.’

Professor Jones has published over 160 peer-reviewed papers (including over 40 in the last three years), contributed to the development of UK national clinical guidelines, and in 2010 was awarded the prestigious International Marcé Medal in recognition of his research on postpartum psychosis.

‘It’s a real honour just to have made the shortlist for these awards, so I’m absolutely thrilled to have won” said Professor Jones. ‘It’s wonderfully encouraging to have our work at the NCMH acknowledged in this way, particularly given the exceptional standard of the other researchers who were nominated.’

Professor Nick Craddock, director of the NCMH said: ‘The Royal College of Psychiatrists is the UK’s leading psychiatry body and one of the world’s most distinguished academic bodies for psychiatry. It’s a great honour to have your work recognised by such a respected organisation, and one that Professor Jones wholeheartedly deserves for the outstanding quality of his research.’

Professor Sue Bailey, President of the Royal College of Psychiatrists, said: "Through the RCPsych Awards, we continue to recognise the most talented individuals and teams working within psychiatry and mental health. Competition for the RCPsych Awards is always extremely tough, and this year we had a record number of entries. Huge congratulations must go to the winners who have demonstrated outstanding professionalism and dedication in helping to improve the lives of people with mental illness."

Professor Bailey paid a special tribute to Dr Margaret Oates, who was presented with the 2013 RCPsych Lifetime Achievement Award. Professor Bailey said: "Margaret has dedicated her career to improving the lives of women with maternal mental illness. In 1974, she opened the Nottingham Mother and Baby Unit. Although this was not the first such unit in the UK, her approach to service provision for women and their babies was revolutionary. Since 1997, her contribution to the UK’s Confidential Enquiries into Maternal Deaths has led directly to significant improvements in the care that women can expect across maternity services, primary care and psychiatry. Without Margaret’s ceaseless work, the lives of women with maternal mental illness, and that of their babies and families, would be much the poorer."