APP trustee Clare Dolman reports on her PhD which some APP members kindly contributed to. 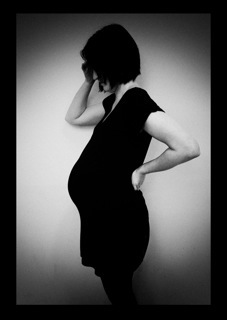 If you’re a woman with bipolar disorder and you’re contemplating having a child, there’s quite a lot to consider. We now know from research (often conducted with the help of Bipolar UK members) that about 50% of women with bipolar are likely to have some sort of episode during pregnancy or postnatally. But 20-25% of women with bipolar will suffer a postpartum psychosis (PP), which is a more severe episode which requires emergency treatment and usually a stay in hospital.

Though these statistics may seem alarming, it’s important to recognise that a) there’s a 75% chance you won’t have a PP and b) if you’re unlucky and do, PP usually responds very well to treatment and you can get back to being a great mum to your baby very soon. When I suffered a PP after the birth of my daughter, it was an advantage that I already had a diagnosis of bipolar because both I and my husband knew within days of the birth that I needed psychiatric help – whereas it often goes unrecognised for a long time in women without a diagnosis, thus giving the condition more time to get worse. I had to go to hospital for five weeks and stop breastfeeding so I could restart my lithium, but I never lost the bond with my daughter and, once home, quickly re-established a routine of caring for her.

For my second pregnancy, I decided to do all I could to avoid anything similar happening so I made sure I consulted psychiatrists and arranged for lots of support after the birth. In retrospect, I think two things determined a healthy birth and postnatal period: 1) having contingency plans in place in case I needed help (which made me less anxious about the whole process) and 2) deciding not to breastfeed so I could take my Lithium straight after the birth and my husband could help with night feeds, allowing me to get my sleep (so important if you have bipolar as we all know).

Having been involved in Bipolar UK and APP for many years now, I started helping Professor Ian Jones to run ‘Bipolar and Pregnancy’ workshops, which made me realise how many other women and their partners were struggling with all the decisions facing them around having children. Would their bipolar medications harm the baby? Or if they stopped them, would their illness harm the baby? Should they stop their medication before getting pregnant – or switch to something else? Would it make a difference what type of birth they have? Should they breastfeed or not? How much support were they likely to need? Should they do a Birth Plan? Was there a chance their baby could be taken away from them? Should they risk having a child at all – might the child inherit bipolar?

So many questions, but when I looked for the research on this subject, there was very little to be found. Largely because of the difficulties of conducting research with pregnant women and the general lack of focus on bipolar disorder. To find out what decisions mattered most to women themselves, and the factors that influenced them, I’ve been pursuing a PhD at the Institute of Psychiatry, Psychology and Neuroscience at King’s College, London, entitled “Women with Bipolar Disorder and Pregnancy: Factors influencing their Decision-making regarding Treatment”.

I interviewed 21 women with Bipolar 1 (the risk of a postpartum episode is higher for Bipolar 1 than Bipolar 2) and a further 50 women on Bipolar UK’s e-community also contributed their views, so – as I know many APP members are also part of Bipolar UK’s community - this is an opportunity to say another ‘thank you’ to all those who helped with the study and to tell you some of the results. I still have corrections to do before I can officially say I’ve completed my thesis, but I have published two papers, one of which is available to read in the British Journal of Psychiatry (Open Access).

My project involved qualitative research, that is I was gathering views and information from sources like one-to-one interviews, analysing them and trying to make sense of the major themes that emerged, rather than describe the statistics of how many people said what (a ‘quantitative’ analysis). From the interviews and internet correspondence with women with bipolar it became evident that there were 4 major clusters of factors influencing their decision-making around pregnancy: Context, Fear and Stigma, but also a very powerful sense of how important having a child was. This diagram illustrates some of the sub-themes under the first 3 headings: 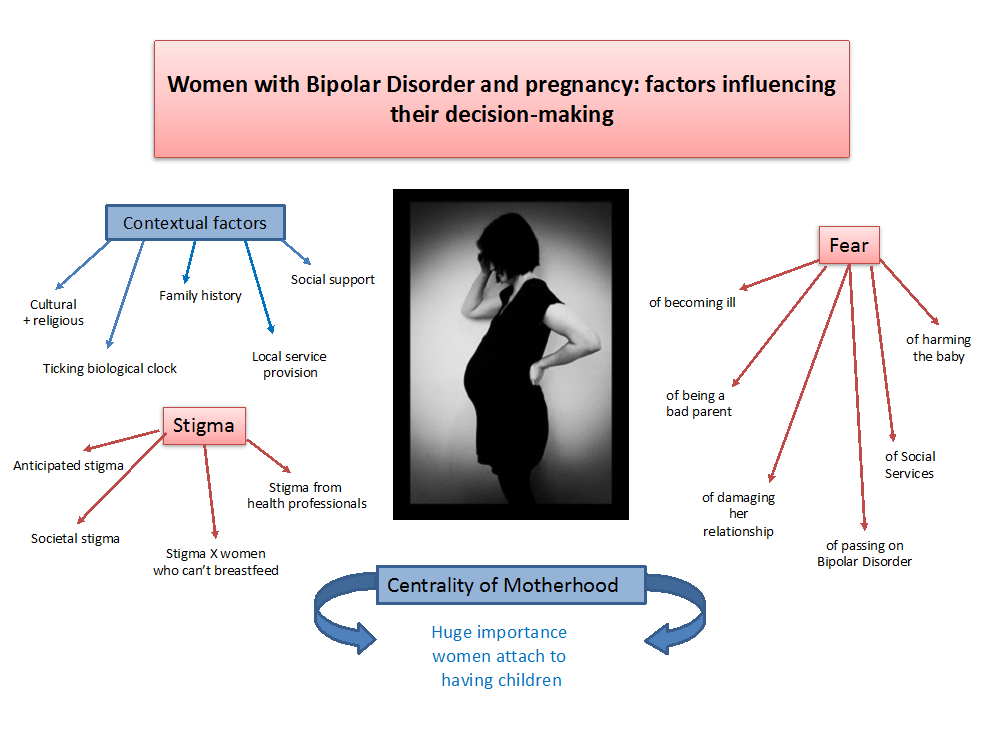 As can be seen, women were frightened of many aspects of childbirth and some suffered stigma but, despite all the obstacles and difficulties they faced, the vast majority of women in this study still wanted to have children – or if they had already given birth, none of them said that they regretted the decision.

Various aspects of the context in which they were considering becoming a parent were important to different women. For example cultural factors were significant for some, such as the Nigerian-born woman who said her family were harassing her to have a child to improve her mental health, or the Pakistani lady who felt her family didn’t understand how she felt because “In Asia they don’t believe in mental illness”. Many women felt the extra pressure of the biological clock “ticking like crazy”, and the degree of support they felt they had was important: both from their partner, if they had one, and their wider family.

"My Mum has been amazing ...she actually did the night feeds and stayed on a camp bed in the front room...She’s been a huge source of support."

The level of support from services was a big factor for some – as this post on the e-forum illustrated:

"I was also visited by one of the nurses from my local MBU and it was explained what would happen if I had to be hospitalised. It really put my mind at rest to know - and to know that I would not be split up from my daughter if I got ill."

Another major theme was stigma, which had four sub-themes: some women were worried in advance about the stigma they thought they’d encounter (termed ‘Anticipated Stigma’), and several mentioned the role of the media in exacerbating society’s stigmatizing attitude towards them, as this woman said:

"It’s the very occasional person with severe postnatal depression who harms her child that’s in the media ...not the people who’ve managed... It frustrates me the way that bipolar is depicted."

Stigma from health professionals was an important theme; women felt that some doctors were deliberately unhelpful because they didn’t approve of them having children. As one interviewee said: "It’s almost like ‘We shouldn’t really let the mad people have children."  Lastly, several women said how upset they were by the attitude of some maternity staff because they couldn’t breastfeed: this Irish lady got quite angry: "I detested staying [on the postnatal ward] ... I got a lot of ‘Why aren’t you breastfeeding? Why?".

There was another large cluster of themes under Fear: fear of harming the baby by taking medication; fear of becoming ill, especially if not on medication. Some were also worried about being a bad parent and coping with the lack of sleep; another concern was the possible strain on their relationship with their partner. The genetic risk was raised by some as a worry (in fact, there is only a one in ten chance of passing on the condition) and many women were frightened that Social Services might take their child away (a very rare occurrence dependent on a number of social as well as medical factors).

In conclusion, this study highlights the fears women with bipolar have around pregnancy, and the problems they experience getting reliable information and advice. All women should be able to see a specialist perinatal psychiatrist and there is a need for more training for all health professionals.

Having children when you have this condition can be challenging and involves a careful weighing up of the issues. It’s important to get as much information about how you as an individual can stay well: so find out what services are available in your area, try to get referred to a specialist perinatal psychiatrist, do some research and find out how others in a similar position have coped.

It’s by no means inevitable that you’ll have a difficult time and, by preparing as well as you can, you’ll give yourself the best chance of staying well, as this contributor to the study said:

"I had only one midwife who followed me my whole pregnancy ... [who] was very aware of what bipolar is. I …was also referred to the CMHT and had a fantastic nurse who still visits me. We agreed on a care plan and I saw the psychiatrist a couple of times to decide what medication would be best ... Without the team I was surrounded by I would have probably ended up having to be in hospital. They are the only reason I managed to stay sane."

Finally, despite the number of fears and worries, most women said these were outweighed by the strength of their desire to have a child. There was also widespread agreement that a decision aid of some kind would be helpful so that’s what I hope to work on next.

Clare Dolman and her daughter, Ettie.