A new study 'Qualitative exploration of the effect of a television soap opera storyline on women with experience of Postpartum Psychosis' has just been published about the impact of EastEnders' award winning Postpartum Psychosis storyline on women with personal experience of PP, by medical student Lewis Roberts working with APP. 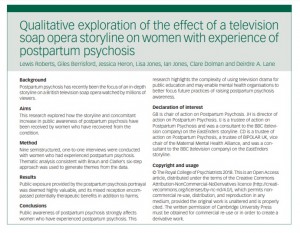 The research explored how the storyline and concomitant increase in public awareness of postpartum psychosis have been received by women who have recovered from the condition. Nine semi-structured, one-to-one interviews were conducted with women who had experienced postpartum psychosis. Thematic analysis consistent with Braun and Clarke's six-step approach was used to generate themes from the data.

The results showed that public exposure provided by the postpartum psychosis portrayal was deemed highly valuable, and its mixed reception encompassed potentially therapeutic benefits in addition to harms. The research highlights the complexity of using television drama for public education and may enable mental health organisations to better focus future practices of raising postpartum psychosis awareness.