And still it rained down, crosshatching the sky.

(On Whom the Rain Comes Down, by Jenny Pagdin)

"There was no real rain - it was a relentlessly hot summer, my baby was three months old, I was just recovering from a severe stomach bug. My episiotomy still hadn’t healed and - with the breastfeeding – I’d not slept properly in weeks. Pregnancy had been a tough time emotionally, but with every new knock I suppressed my emotions further - and besides, I felt happy. While I was carrying, my best friend became seriously ill – several family members were accused of fraud - my auntie died – we had an increased chance of Downs - my flatmate and good friend killed herself - I weathered it all. Because I was going to protect my unborn child from all my suffering - by making sure I didn’t suffer any of it.

Then one day my baby fainted and we couldn’t bring him round for quite a few minutes. There had been concerns about him since his six-week checks. Something ‘went’ in my brain, and the next day I experienced a sudden and acute postnatal psychosis.

We waited far too long to seek help, not really aware that the condition existed. Meanwhile my hallucinations, delusional beliefs and behaviour were getting out of control. After a long weekend of this it was time to see the doctor. When he told me I would be treated as an inpatient I was relieved. I assumed that after a night away I would be able to come home, just as I’d had one night in hospital after giving birth - I didn’t expect to be 200 miles from home for six weeks. But I did make it back. 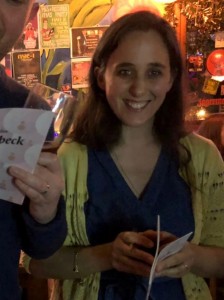 Healing has come with the passage of time, the support I received from an APP volunteer and my medical team and - perhaps most of all - from the rare and precious opportunities I have had to meet and speak with other women who have been through this experience. I now know there is no such thing as a ‘them’ and an ‘us’ - we all share the same human vulnerabilities.

I have also found refuge in writing. I wrote most of the poems in my short collection Caldbeck a full four years after the postnatal illness. By then I had made a good recovery, and writing them cemented this by giving me the feeling of resolving traumas. I feel proud of my achievement with publishing the pamphlet and hope it will resonate for others in a similar position."

Click here to read more of Jenny's poetry and order a copy of her debut pamphlet.