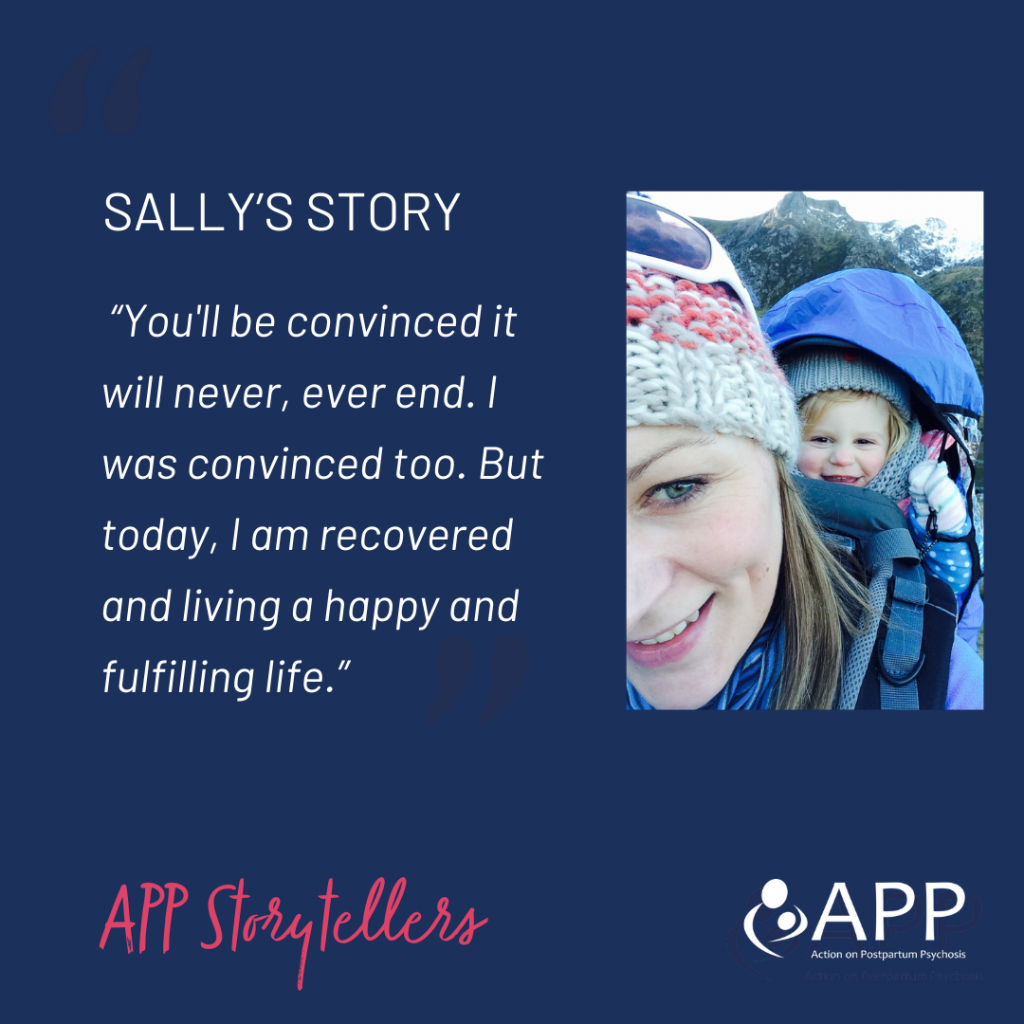 When I was separated from my baby daughter for hospital treatment I became convinced that something terrible had happened to her. For a time, I even believed that she might have died. For a woman experiencing postpartum psychosis (PP), the trauma, separation and anxiety was unbearable.

You have these ideas of starting family life in a bubble of happiness. Of course, we know that labour is painful and that sleepless nights are to be expected. But my experience was wildly different to what I was expecting.

Immediately following the birth of my gorgeous baby girl, Ella, was one of the most terrifying, inescapable nightmares I could ever have imagined. I was in such utter pain and despair day after day that I constantly thought of walking into the sea near our home in North Wales.

I’d had a relatively smooth pregnancy – nothing out of the ordinary. However, I was a week overdue and I was showing some signs of preeclampsia, so I was induced. The labour was difficult and Ella’s heart rate kept dropping and she was in distress, so eventually, she was born by Caesarean Section. But as I came round from the anaesthetic my confusion was off the scale.

I didn’t understand what was happening and, as such, I had a brain scan for a suspected stroke, which thankfully came back negative. I was simultaneously pleading with the nurses to sit with me as I was so scared about what was happening, and paranoid that they were talking about me. A few days later I got up to go to the toilet and collapsed, sobbing and refusing to get up.

In my mind, I believed that I'd died.

Everything was frightening and intense. The sound of babies crying was deafening, the whirr of the air conditioning unit overwhelmed me and the canteen trolleys sounded like trains crashing through the ward; lights being switched on were like explosions and I could see shadows on the wall. I saw a midwife take Ella away, and immediately believed she was being resuscitated because something awful had happened or perhaps I'd harmed her.

All throughout, I remained convinced that I'd hurt my baby and that I had died and was now living in the 'after life', a kind of hell. The nurses brought Ella to see me, to reassure me she was ok, but I was convinced they'd swapped her and that she really wasn’t OK.

I now know that I was having a psychotic episode.

My husband, Jamie, was informed that I was suffering from PP and I was transferred to a general psychiatric ward. I was prescribed anti-psychotic and anti-anxiety medication. I was also separated from my baby which made me constantly anxious and reinforced some of the beliefs I had about her being swapped or coming to harm.

A week later, I had a review with the consultant and I told him things were better than they were just to be allowed out of there. A home treatment team was arranged to visit me every day but things didn't improve much. I'd manage to help meet Ella's basic needs, change and feed her. But I was going through the motions.

I then hit an extreme low, a bleak depression punctuated with psychotic symptoms.

Ten months after coming home, I told Jamie that I couldn't go on. My husband, who'd done so much to help me, was distraught. Determined to help, Jamie did a literature review on PP treatments and  electro-convulsive therapy (ECT) came up a lot. We found and asked to be referred to a world-renowned expert in PP. He agreed that ECT might help me.

There’s a lot of stigma around ECT – and you immediately think it's a barbaric, horrible treatment, involving being strapped to a chair and electrocuted. To be fair, it is fairly dramatic - you're anaesthetised and electrical currents are passed through your brain to trigger a seizure. But for someone like me, who was so acutely and chronically unwell, it was something that really helped.

Half way through the ten sessions, there was a shift in my thinking. Something terrible was being lifted from me. I believe ECT, along with the amazing peer support I received from other women who had experienced what I had, saved my life.

Gradually, I've grown stronger and my bond with Ella has become stronger too. It's sad to think about what I've missed out on but now I look at her and get excited that everything's ok and that we're here - happy and healthy.

Once you've suffered from PP there's a high chance of it recurring with subsequent pregnancies. It's a very personal choice, but even if there was only a slight risk of going through that again, for us, it's just not worth it.

But it's very important to me to give hope to others going through the horrors of PP. You'll be convinced it will never, ever end. I was convinced too. But today, I am recovered and living a happy and fulfilling life.