APP would like to say a huge thank you to everyone who is supporting our #MilesForMumsAndBabies challenge. We’re aiming to raise more than £10,000 to support our work by asking people to walk, run or cycle 10 miles, 20 miles, 500 miles or even 1,000 miles! Each mile reflects the journey mums, babies, partners and families travel to be together, whilst mums receive care in Mother and Baby Units (MBUs). We’ve had a fantastic response to the challenge so far. Our fundraisers include:

Katherine Paul and her son Harris walked 3 miles in one day on 6th May (during Maternal Mental Health Awareness Week). Katherine was hospitalised in 2019 and 2020 and each mile represented the journey she and Harris made in and out of Florence House MBU. Katherine and Harris raised £76.82 for APP. You can still visit and donate to their JustGiving page  here.

Dorota Donigiewicz walked more than 100 miles during May to support MilesForMumsAndBabies. Dorota experienced postpartum psychosis (PP) in 2015 after the birth of her first child and says during her recovery she found APP’s forum and other resources very valuable. Dorota has raised £420.75 for APP. 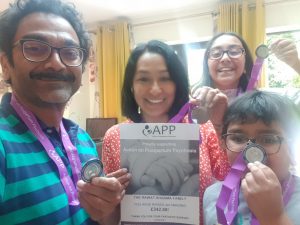 Consultant Psychiatrist, Neha Rawat, and her family covered 534 miles in May through a combination of walking, running, jumping and crawling! The Rawat-Sharmas chose their target to represent the distance between the NHS Lothian Livingston MBU in Scotland and Jasmine Lodge MBU in Devon. Neha said they wanted to highlight the fact many families travel hundreds of miles to be together whilst a mum is being treated in hospital for severe mental illness. Neha and her family have raised more than £300 for APP. You can still donate to their JustGiving fundraising page here.

The team from the MBU at Glasgow’s Leverndale Hospital and colleagues from the Community Perinatal Mental Health Team challenged themselves to walk 10,000 steps a day throughout May. APP has supported the MBU and the Glasgow team wanted to take part in #MilesForMumsAndBabies to raise awareness of postpartum psychosis and to support APP. The team went for walks before, during and after work (with and without patients), and have raised more than £5,800 for APP. You can still donate to their JustGiving page here.

Hannah Bose walked and cycled 95.19 miles during May – that’s the distance from her house to the nearest MBU in Exeter, Devon. Hannah was joined on her walks by her cockapoo, Tessie. Hannah works for the DadPad (a guide for new dads developed with the NHS), and APP's Partner Peer Support Facilitator Simon O'Mara recently wrote a blog about PP for their website which you can read here. Hannah has raised over £290 for APP. You can still donate to Hannah – and Tessie’s –  fundraising page here. 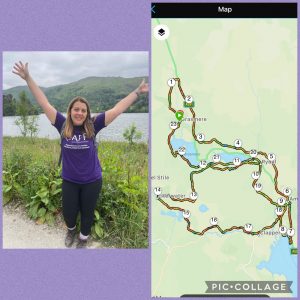 Crisse Buttery works within the community perinatal team as a mental health nurse and has close links to the MBU at Wythenshawe. Crisse walked 22 miles in a day - which represents the 22 MBUs in the UK - on 21st June, International Fathers Mental Health Day. Her aim was to raise awareness of the impact that PP has not only on mum and baby but on fathers too. Crisse has raised £490. As this illness impacts the whole family unit, the money will be split between APP and the MBU at Wythenshawe. You can still visit her JustGiving Crowdfunding page here.

Ailania Fraser walked 22 miles in June to support MilesForMumsAndBabies- that’s the distance between Edinburgh Royal Infirmary and the Livingston MBU. This represents the journey she travelled when diagnosed with PP in April 2019, during which time she spent around seven weeks under the amazing care of the Livingston MBU. Ailania’s husband Stephen and their two year old son joined her on a lot of the walks.  Ailania and her family have raised £100 for APP.

Lucy Nichol, APP’s Media Coordinator, and her friends Caroline, Bex, and Johanna, challenged themselves to walk, jog, cross train or run as many miles as they could throughout the month of June to raise money for APP. Lucy wanted to raise awareness of PP amongst a wider community, and spread the word as far as possible. She wanted to get outside and build her fitness back up as exercise is good for mental health. She and her friends completed 381 miles and have raised £290 for APP. You can still donate to their JustGiving page here.

Anna Grisedale had PP in 2015 and 2018, and challenged herself to walk 119 miles, which represents the journey she made from Leeds to the MBU in Morpeth with her first born. Anna was initially admitted to Morpeth as no bed was available in Leeds MBU. After a few weeks, she was transferred back to Leeds, which enabled Anna’s family to visit her regularly. She says this was a lifeline to her and her family. During her illness she experienced the therapeutic benefits of walking. 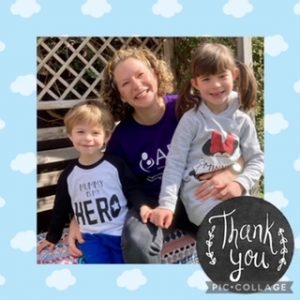 Anna has raised over £1500 for her challenge via JustGiving and said 'Thank you so much for all the amazingly generous donations which will help support so many women, babies and their families. I have loved every step of my walks and have been overwhelmed by the wonderful messages of support. I have huge appreciation to all the staff at Leeds MBU who enabled me to be with my babies throughout my illness, which allowed our bond to remain strong throughout and  is paramount for families like ours'.  You can still donate to her JustGiving page here.

Danielle Thomas APP’s Assistant South Wales Coordinator, and her husky dog Lyra, walked 106 miles during June and July, which represents the distance from their house to the Melbury Lodge MBU in Winchester. Danielle experienced PP after the birth of her daughter in 2017, at which time there was no MBU in Wales. This meant she was a 2.5 hour journey away from family and friends during her stay at Winchester MBU. This April the new Uned Gobaith (Unit of Hope) MBU opened in Wales and Danielle was able to collaborate with its planners and artists through APP. Danielle and Lyra have raised £660 for APP. You can still donate to their JustGiving page here.

Emma Charlton works at Beadnell MBU in Morpeth. Along with her colleague Katie, Emma walked 161 miles over a 12 week period to raise money for APP. Emma chose the distance to represent the 161 women admitted to the ward since she started working in Perinatal Services. Emma and Katie were accompanied by other colleagues on some of their longer walks and have raised £1150 for APP. You can still donate to Emma’s challenge here.

Naomi Gilbert, APP’s Assistant Peer Support Coordinator, took part in her first ever triathlon on 26th September. She chose a triathlon to highlight that during her recovery from PP she had to go to three separate psychiatric hospitals without her daughters, as there was no local Mother and Baby Unit (MBU) at the time. Naomi completed three challenges - swimming, cycling and running - in 1 hour 53 minutes and her younger daughter Ella helped her to run to the finish line. Naomi has raised more than £1,100 for APP via her Facebook fundraising page which you can still donate to here.

Rachel Kerr walked 100 miles for her MilesForMumsAndBabies challenge. Rachel was hospitalised for three weeks in 2016 having developed PP after the birth of her daughter. Last year, she gave birth to her son and received support from APP. Rachel has raised more than £45 for APP.

The team from the new Perinatal Mental Health Service in Ayrshire and Arran challenged themselves to walk 1,400 miles throughout October. They work with mums who are affected by severe mental illness in the perinatal period, and wanted to take part in #MilesForMumsAndBabies to raise awareness of PP, support APP, and come together as a team. They chose the distance as it represents the 1,400 mums who experience PP in the UK each year. The team have raised more than £1250 for APP. You can still donate to their challenge here. 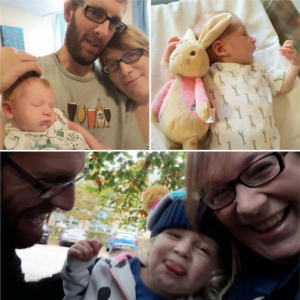 Emily Saunders, a peer support volunteer with APP, walked and cycled more than 500 miles between 1st July and 14th November 2021. These dates are important to her as they are the dates she went into and then finally came out of Nottingham MBU in 2017 (having had two stays) when she had PP, severe PND and anxiety after the birth of her daughter.

Emily chose the distance as it represents the almost 500 miles from the most northerly to the most southerly MBU. Emily has raised more than £506 for APP. You can still donate to her challenge here.

Shirley Holmes, a health visitor, has walked the six different paths up Snowdon, a total of 48.5 miles. with her husband and sister joining her for some of the walks. Shirley decided to fundraise for APP after recently learning more about postpartum psychosis. She’s also keen to support our campaign for an MBU in North Wales. Shirley’s first part of her challenge started in May and she finished the six routes in October. Shirley, her husband and sister have raised more than £472 for APP. You can still donate to their challenge here.

As a team of 11, Rachel Lucas and her family and friends walked 1,400 miles for APP during November. Rachel experienced PP two years ago and spent six weeks in Leeds MBU. Rachel is a big supporter of APP and is also one of our trained Peer Support Volunteers. She held a fundraiser with her family and friends called ‘Four million steps for APP’ during November last year. She has also developed the ‘Blooming Mum to Be’ and ‘Brand New Mum’ boxes which she is selling via her website www.pourlamaman.co.uk, donating some of the profits to both APP and PANDAS Foundation. Rachel and her team have raised more than £360 for APP and the donations will be match funded by Rachel’s employer. You can still donate to their challenge here.

Stephanie Fakharzadeh was hospitalised in an adult psychiatric ward in the USA in 2020 after giving birth to her daughter. Covid-19 restrictions meant she wasn’t allowed to see her baby for five days. Stephanie has walked 100 miles during 2021 – the round-trip distance it would have taken for her to visit her daughter once a day during her hospital stay. She was joined by others on her fundraising walks to share postpartum and perinatal stories and to offer support. Stephanie has raised more than £1070 for APP. You can still donate to her challenge here.

Debbie Sells is the Ward Manager on the MBU at Nottingham and has covered more than 1,000 miles during 2021 through a combination of walking and running. She has worked on the ward for 24 years, and the 1,000 miles represents the long distance many families travel to receive specialist inpatient care. Debbie says that APP provides vital support for women and families who experience maternal mental illness. Debbie has raised more than £967 for APP. You can still donate to her challenge here.

Inspired to join in the #MilesForMumsAndBabies challenge? Find out more and sign up here >