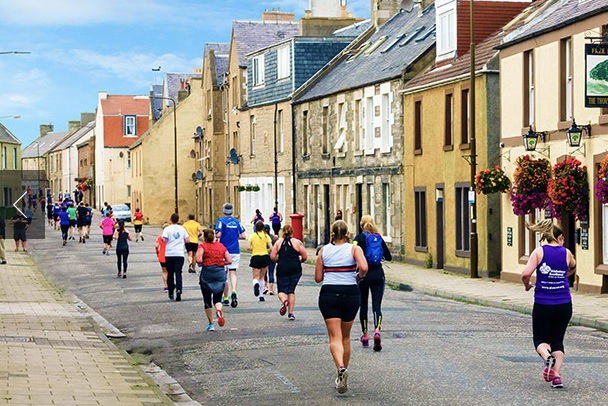 Three cheers for Anna who is taking on the Scottish 10K on Sunday 23rd September in aid of APP!

The Scottish 10k (& half marathon) begins just outside Edinburgh and taks you along the magnificent East Lothian Golf Coast before finishing in the final furlong at Musselburgh Racecourse.

Anna says: "I had Postpartum Psychosis after the birth of my son in April 2017. It
occurred approximately 3-4 weeks after giving birth. Straight after the birth prior to the psychosis I developed extreme anxiety and was having regular panic attacks, difficulty sleeping, inability to perform simple tasks and memory loss. At the climax of my illness I couldn't walk, kept collapsing and was convinced I was dying. PP is a psychiatric emergency, it is NOT the same as postnatal depression. Due to a lack of Mother and Baby Units, 50% of women are admitted to general psychiatric wards and separated from their babies. I was lucky that I was admitted to one of only 2 units in Scotland.

I had never had a mental illness before. It is common that women who get PP have no previous history of mental illness. I had never had a panic attack before. I don't think anyone who hasn't experienced it can truly understand how terrifying the descent into Psychosis is. Action on Postpartum Psychosis was a lifeline for myself and my family, it connected us to other women who had experienced PP and recovered. APP has experienced volunteers who offer help and support to women and their families affected by PP. They raise money to fund research into the causes of this little understood illness.

Postpartum Psychosis effects 1-2 in every 1000 women who give birth yet I had never heard of it. Many of the front line health professionals I saw had no knowledge of it. This lack of understanding really impacted my level of suffering and has led to poor outcomes for many women. Suicide is the leading cause of maternal death in the UK: the majority due to PP. APP helps raise awareness and addresses the stigma and isolation felt by many women.

A large part of my recovery has been exercising. I have never been much of a jogger but since starting I feel stronger both physically and mentally. 10k is a big deal for me so please support me if you can to raise as much money as possible for Action on Postpartum Psychosis."

Please support Anna and her amazing challenge, and donate what you can via Anna's JustGiving page here.

Thank you so much Anna! We hope you have a brilliant 10K on 23rd September!