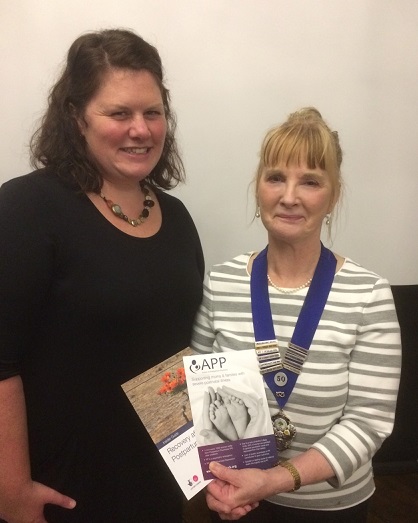 APP were delighted to be asked to speak to club members at the Cannock & District division of Soroptimist International, after President, Val Jones, put forward APP as one of their charities to highlight for the year. Jocelyn Ellams attended their meeting on 24th October in Cannock and spoke about her lived experience of PP to the members.

They said:
'Action on Postpartum Psychosis [APP] is one of the charities being highlighted this year by President Val Jones, Cannock Soroptimists. It is a small and little known charity; in fact, prior to President Val naming it only 3 members of the club had ever heard of it!

Jocelyn...gave a most interesting, emotional and enlightening presentation to club members [as] she bravely told us her story, explaining thoughts that she had at the time which in one sense she knew could not be true though she could not control them. She made it possible for us all to have some understanding of the dreadful experiences she had at that time – and also proved she has completely recovered.

Soroptimist Kate Young hosted Joss and thanked her for giving up her time and, more importantly, for her honesty in telling us about how she was affected. She gave Joss a donation towards the work of APP from SI Cannock and told her that at the end of President Val’s year there would be a further donation.'

Thanks very much to Kate Young and all at the Cannock & District Soroptimist International club!

You can find out more information about Cannock Soroptimists at www.sigbi.org/cannock-and-district or on their Facebook page