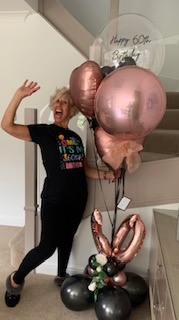 Huge thanks to Karen Savage who raised incredible funds for APP through her 60th birthday fundraiser!

Karen said: "We all may have a different story to tell but those suffering from Postpartum Psychosis have one thing in common is how very frightening this illness is and the speed that it can manifest itself! When I had my baby, APP was not as we know it today and there was no care network and I only wish I had the benefit of their peer support.

I suffered from Postpartum Psychosis (PP), which I can now freely talk about without the stigma attached that prevented me from disclosing what a nightmare this rare illness was for me and my family back in 1985! The time which should have been the happiest of my life, ended up with me on a psychiatric ward, separated from my baby. Had I not agreed to go in voluntarily I would have been sectioned. I was severely unwell, and it was only at this point I understood that something was very wrong but didn’t know what.

I had always intended to ask my friends and family who wished to buy me a present to celebrate my 60th birthday. To raise money for APP would be the greatest gift anyone could give me, I wanted to raise as much money as possible. Never did I imagine that I would be celebrating my 60th during a Pandemic and that my husband’s gift of travelling on the Rocky Mountaineer would have to be put on hold and that I wouldn’t be getting the kisses and cuddles from my granddaughter. Now more than ever charities are desperate for funds that would normally arise from fund raising events that have had to be cancelled or postponed!"

Thank you Karen and to everyone who donated via Karen's JustGiving page here, Karen's birthday fundraiser has raised an incredible total of £2225!!

If your birthday is approaching and you would like to set up your own birthday fundraiser, contact app@app-network.org - we would love to support you and celebrate together!