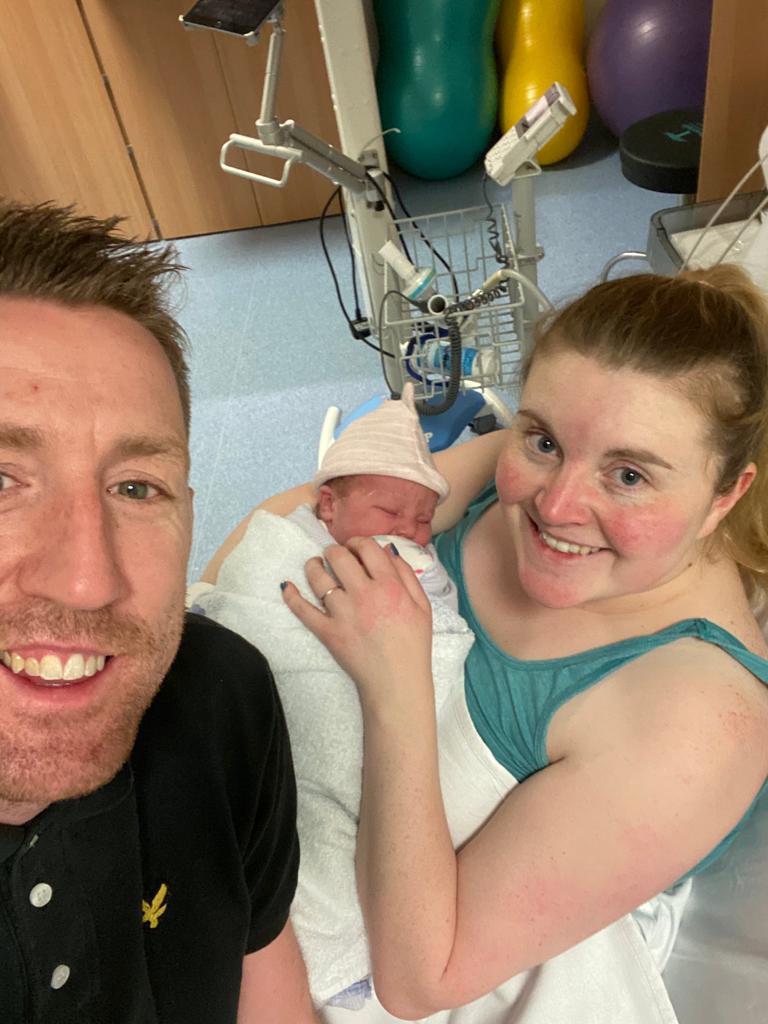 This month, our incredible fundraiser Lee Smith of Washington, Tyne and Wear, will embark on the first of twelve physically demanding challenges to fundraise for APP and raise awareness of postpartum psychosis.

Two years on, now fully recovered and a happy and healthy family of four, Lee and Jess are doing all they can to raise awareness and much-needed funds - and for Lee this means taking on twelve difficult challenges starting on Sunday 11 December.

Read Lee’s story below. A link to his Just Giving page can also be found at the bottom of the article. On 5th December 2020 our family grew from 3 to 4 with the arrival of Freya Rose smith, light at the end of a tunnel after a turbulent year due to the global pandemic or so we thought.

Due to the restrictions in place because of covid-19 I was only allowed in for the birth and ushered out quite quickly leaving Freya in safe hands of Jess and the hospital staff. Jess spent the next 20 hours alone with our beautiful healthy baby, hourly checks from midwives to make sure mother and baby were doing ok, from the outside looking in all seemed well but Jess had been texting throughout the night saying she was struggling to sleep reassuring her that it was a strange environment and once she was home she’d get a good nights sleep and full support from me and Lola.

I was able to collect both Jess and Freya and introduce Lola to her new baby sister the next day, Jess didn’t seem herself but I just put it down to sleep deprivation offering full support to do all the night feeds and nappy changes so she could catch up on sleep after all she had done the hard work the previous 9 month. Throughout the night Jess struggled to settle overly checking Freya and referring to her as “the baby”, talking a lot and doubting basic decisions being made of bottles, clothes and nappies-again putting this manic behaviour down to sleep deprivation I continued to offer support and reassurance, after-all this was second time round.

Jess’ odd behaviour continued into the next day, a visit from the community midwife added Jess with some reassurance that everything was fine, Freya was healthy and eating well. With the community midwife leaving her number and offering a word of advice at the end of the phone if we needed anything- potentially a life saving decision.

Jess’ thought process became more paranoid about the world around her, and a visit into the local shops ended quite abruptly and rudely from Jess stating everyone was looking at her and she may as well killer herself because she’s a rubbish mam demanding I needed to phone the midwife, storming off leaving me pushing the pram, for anyone that knows Jess knows how out of character this behaviour is.

Becoming increasing concerned i phoned the midwife and asked her to come back out as something wasn’t right with Jess. Within the hour she’d arrived Jess’ behaviours almost changing by the minute, very visibly worried, asking strange and bizarre questions and referring to Freya as Lola or “that baby” .

The midwife was quick to conclude something wasn’t right and thought she might have a water infection and booking Jess into the local go for a blood test for the morning, and prescribing some sleeping tablets to help Jess rest, she also left a “crisis” number if things got worse, I remember thinking this was strange thing to offer for a water infection.

After just an hour I quickly recognised why I was given the crisis number- Jess’ behaviour became increasingly manic and it became clear that this was more than just a water infection, Jess was in fact having a psychotic episode and was really mentally ill.

After a call for help to the crisis team it was clear that Jess needed help and help fast- Due to the pandemic medical help and the NHS was stretched to breaking point, a wait for an ambulance was 6 hours, the 999 handler advised to get Jess to A&E as soon as we could.

The night of the 7th and morning of the 8th December were hands down the worst of my life, worry if I would ever see Jess again. Jess’ behaviours deteriorated rapidly and she ended up sectioned under the mental health act after jess having an episode of Postpartum Psychosis, Heart-breaking conversations with social workers, psychologists and doctors to have about your own wife.

Jess was subsequently taken to a specialist mother and baby unit in Morpeth to aid her recovery, getting full mentoring and support for specialist doctors.

Two years on and we are in a much better place- but it hasn’t been easy. The reason I write this is I want to raise awareness of mental illness within new mams and the impact it has on the surrounding families most specifically the dads and grandparents, I have found an amazing support Charity called Action on postpartum psychosis, and want to raise some money to support families going through what we have and raise awareness of what is quite a taboo subject.

I have set myself a goal of completing at least one physically demanding challenge a month until December 2023 to raise the profile of Action on postpartum psychosis and collect any donations along the way.

My first challenge is 11th December a 10 mile run along with my good friend David Douglass, we are being transported blindfolded 10 mile from Newcastle city centre with no technology, maps or help, blind folds removed at the drop point and make our way back.

If you would like to sponsor me, or join in any of the planned challenges please don’t hesitate to get in touch with me to support this amazing charity.