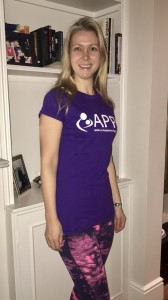 For the first time, APP has been awarded a charity place in the London Marathon and we are thrilled to introduce you to our runner, Katie Dyer.

Please support and sponsor her here.

Katie is running in memory of her dear friend Alice Gibson-Watt who passed away following complications connected with Postpartum Psychosis. Her daughter, Chiara, was five weeks old. Here's her story, in her own words:

"I am a 37 year old Mother of a little boy and until 2012 I  had no knowledge or awareness of Postpartum Psychosis. Despite being given information on Post Natal Depression during my pregnancy no one seemed to mention or discuss the possibility of this sudden and severe condition.

Alice and I had been friends since we were little. She was in fact my oldest friend, an unwavering constant in my life as we grew up together, and  it was with much excitement that we awaited the birth of her daughter, Chiara in October 2012. I had given birth a year earlier and couldn’t wait to share the experience of Motherhood with her, as I had all the other important moments in our lives from travelling around the world to planning our weddings. Whilst I tentatively warned her about the need to rest and the impact of sleep deprivation, I never dreamt to mention post natal depression nor did I even know about the possibility of postnatal psychosis.

Four weeks after her daughter was born, Alice suffered a psychotic episode and further complications led to her passing away a week later leaving behind her devastated family, friends and a daughter who will never truly know just how wonderful her Mother was.

There is nothing positive about this situation or this mental illness. It is vicious, cruel and deeply unjust. On the morning I was told that Alice, my bright, beautiful, determined friend who had fought so hard to become a Mother, was in hospital with a bleak prognosis I felt an overwhelming urge to run. Running has a meditative quality that I discovered in my late 20s and I think has been essential to my own mental stability in times of stress. And so I ran that day trying to tell myself if would be OK. Unfortunately for Alice and those close to her; it was not.

However, in the spirit of Alice’s unquestionable strength and positivity, it is so important to remember that there is much to be done to ensure other families do not suffer in the same way. To this end, I am hugely honoured to be running the London Marathon for APP. The work they do to publicise, support and educate is vital to prevent further devastating losses and to provide essential life lines to sufferers and their families.

I will run in Alice’s name and all those who have suffered from this unjust and frightening condition."

You can support Katie's training and fundraising at her Virgin Money Giving page and save the date! The London Marathon is on 23rd April 2017 and we want as many APP supporters to be there to cheer her on as possible.