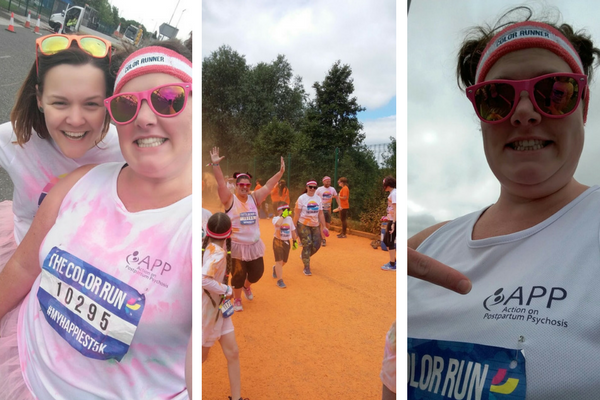 Even though she hates running, Jocelyn took part in the Manchester Color Run on 1 July to raise money for APP: donate here

It wasn't the first time. She enjoyed it so much last year she went back for more!

Three cheers for Jill Domoney, one of APP's two runners in the Royal Parks Foundation Half Marathon.

The race takes in the capital's world-famous landmarks on closed roads, and four of London's eight Royal Parks - Hyde Park, The Green Park, St James's Park and Kensington Gardens. As it takes place on 8th October the runners should enjoy glorious shades of autumn through the beautifully kept parks.

Jill may be the one in training but wonderfully, the whole Section of Women's Mental Health at Kings College London are getting behind her. Expect a cake sale, rattling of collection boxes and general drumming up of support for Jill's athletic effort.

We are very grateful to Jill and her colleagues for recognising the value of APP's essential work with mums and families affected by Postpartum Psychosis and all their efforts to fundraise for us. 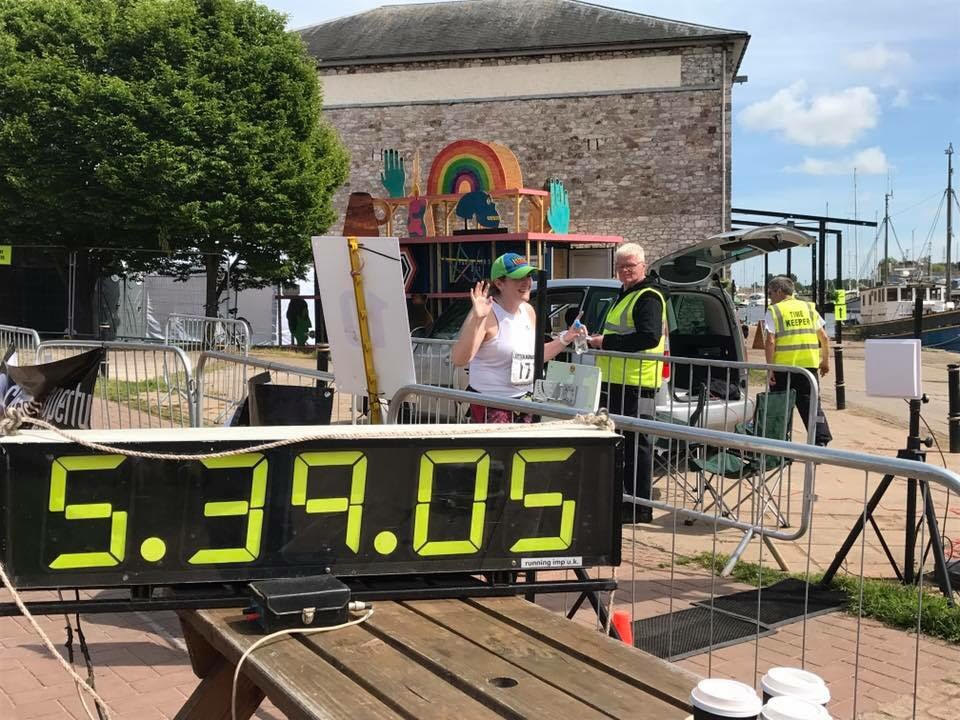 Congratulations to Holly Haywood who ran the Exeter marathon on 21st May to raise money for APP. She says:

It was a very hot day, but the course was picturesque which helped. I got a personal best of 5 hours 39 mins. All recovered now and looking into booking my next one.

Running one marathon is a huge endeavour but Holly is running 12!  Here's why:

My sister suffered with this after my nephew Leo was born and it changed our family. We had never heard of the condition before and not realised that Beth was unwell until she was not able to cope with everyday life.

We spent the first few days looking after Leo and supporting Beth, before she was admitted to the Mother and baby unit in Bornemouth where her condition gradually improved and she was allowed home.

It's only now, nearly 3 years down the line that I don't constantly worry about Beth. She is a tough cookie and will survive anything.

Please donate to help APP do their amazing work supporting families like mine.

So, that's three down, nine marathons to go!  Holly would definitely appreciate your support and donations to get here there. 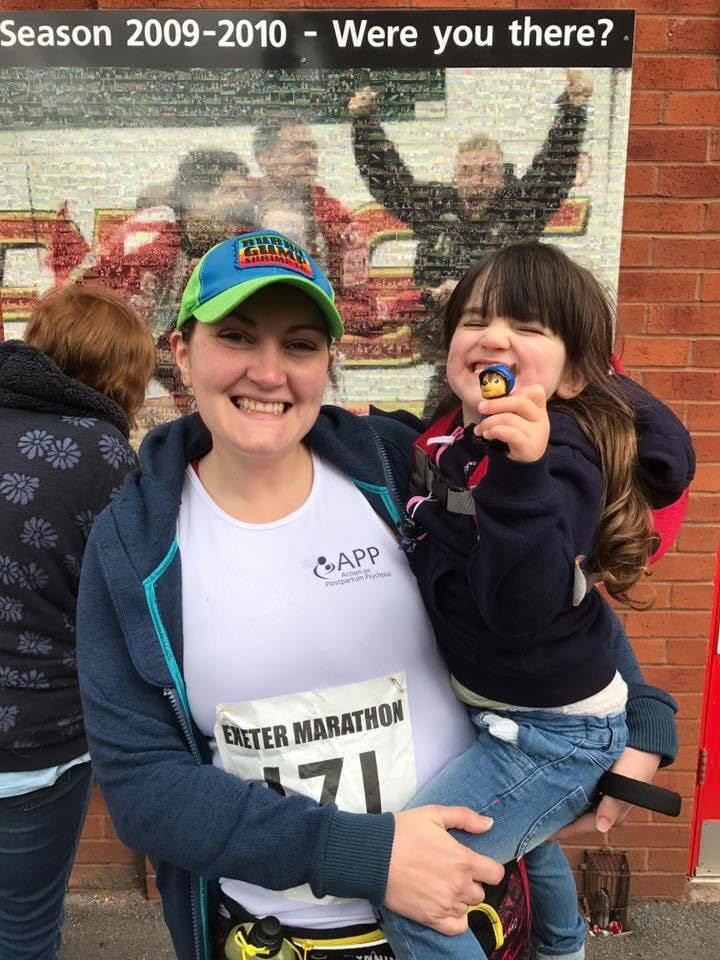 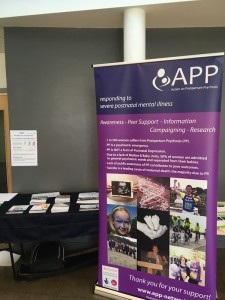 APP’s Expert by Experience sessions continue to be sought after and our partnership with Institute of Health Visiting (iHV) saw 4 further sessions after the successful pilot in Hull earlier in the year.

During Maternal Mental Health Awareness week, the Institute announced the collaboration, which aims to ensure that the APP voice is central to their training:

“Women, who are experts by experience from APP, deliver on the iHV Perinatal Mental Health (PMH) programmes so all the health and social care professionals we train understand what they need to do to best support women and their families”. 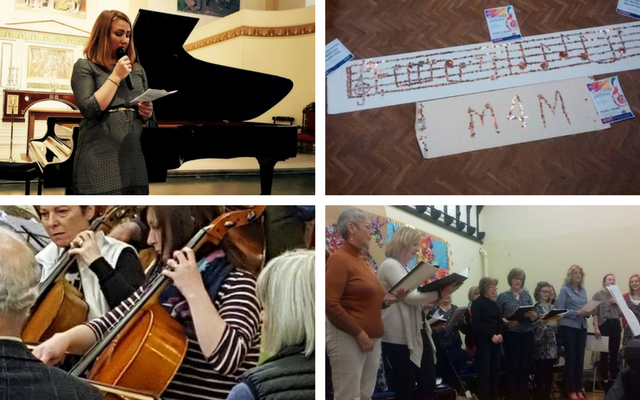 We are also very grateful to our team and volunteers who worked so hard to promote and support the initiative, shout out to Hannah, Ellie, Kat, Emma, Heather and many others.

Media activity in this time was also high, including a Radio 4 interview with Hannah B about her PP experience and a Daily Mail feature on Hannah F; go to our media page for the latest news, including International Day of the Midwife which also fell in early May and was supported by midwives in Bradford.

Peer Support & Regional Reps Co-ordinator Hannah also attended an IDM2017 event in Darlington, hosted by the Co Durham & Darlington Trust.  Amongst speakers including Baroness Cumberlege, who mentioned the need for improved perinatal mental health care as part of the Better Births review, and national and regional figures from Royal College of Midwives and others, Hannah shared her experience of PP and the changes in the PMH landscape in recent years.  She also managed to give APP Guides to the Baroness! 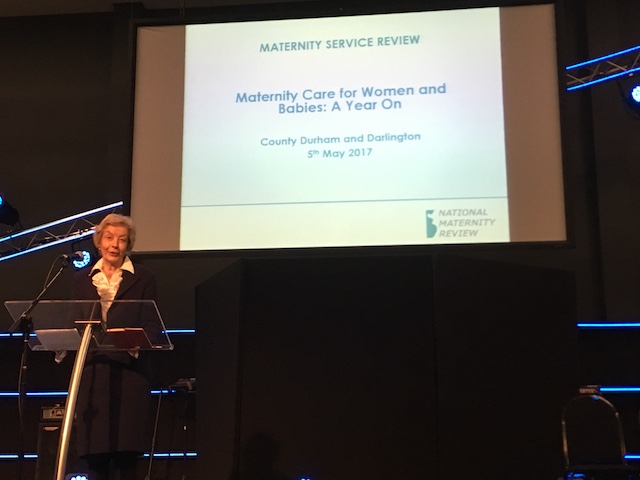 We are extremely grateful to APP volunteer Benedicte Waaler who organised a wonderful piano recital by renowned pianist, Waka Hasegawa, in London last week as part of our Music4Mums awareness and fundraising initiative.

The concert, refreshment collection, auction and Just Giving page has raised a tremendous amount, over £3,000 to date.

- Waka Hasagawa who is an incredibly talented and hardworking pianist (and single mum!)
– actor Katie Underwood who auctioneered off all the art and experiences (she was so witty and really made it fun!)
– the artists who donated art: Nadia Attura, Lene Bladbjerg, Daniel Mackie, James Tarry, Yo Okada & Kel Rae
– chef Yuki Gomi who donated a sushi cooking class
– the manager at Metropolis Studios who donated a tour of the studios
– APP volunteer, Kathryn Grant de Vecchi, who was absolutely brilliant, bringing lots of cupcakes donated by Butterscotch bakery, helping set up and clear out and giving a speech about APP and all along promoting and sharing on social media!
– and of course friends who volunteered on the night and donated beer and wine!

APP wishes to add its thanks to all above and especially Benedicte for organising such a high profile event so swiftly and effectively. 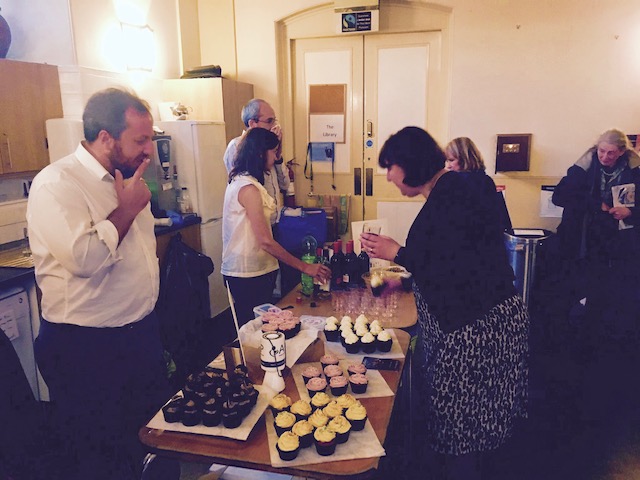 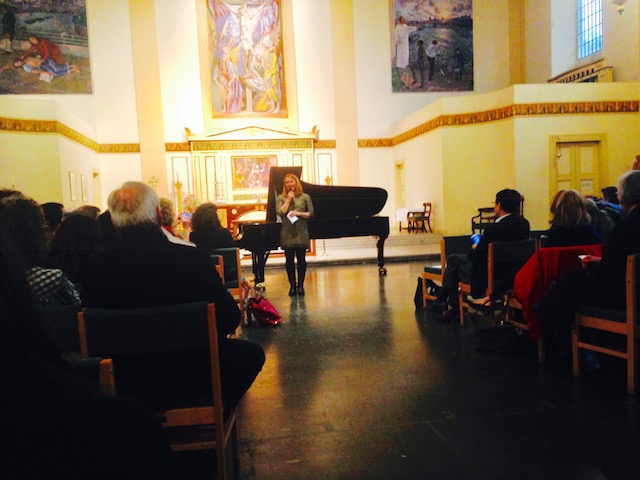 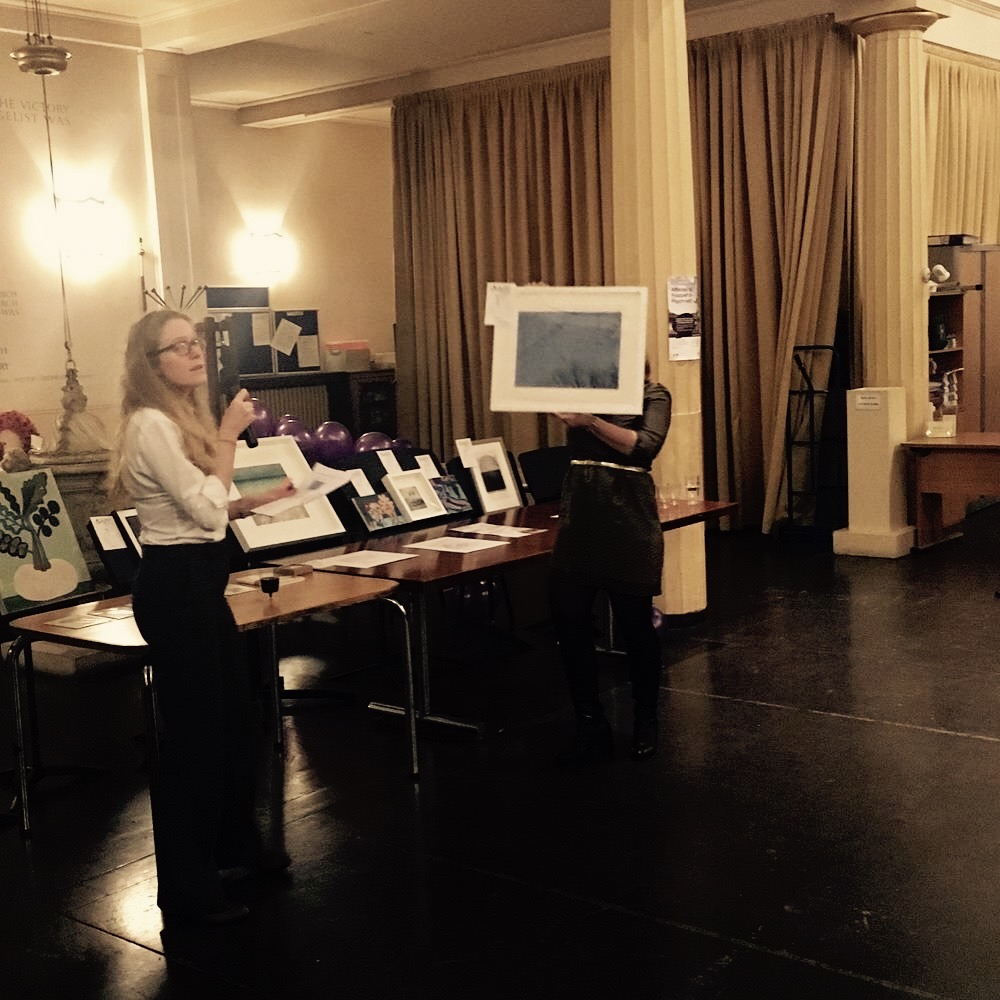 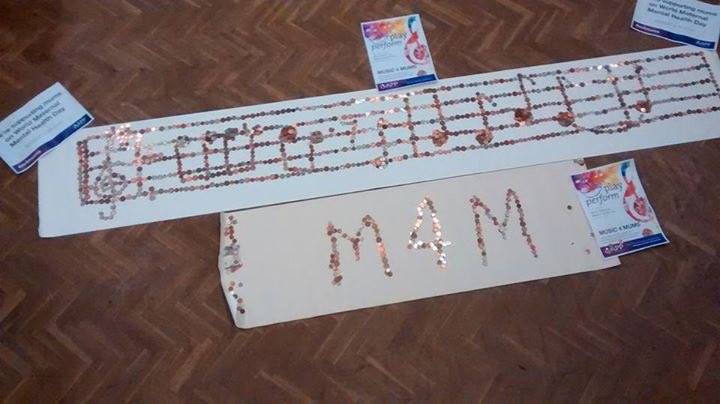 "Is it Abba week? We've written out 'Thank You for the Music' in 'money money money'! All for a good cause #m4mums"

We're are in awe of the amazing Music4Mums coin art from York Light Orchestra! Thanks so much to everyone who contributed and got so creative in aid of APP.

Many thanks to Harmonics Community Choir and Tutbury Village for their support of Music4Mums. Here's a report from their musical evening. 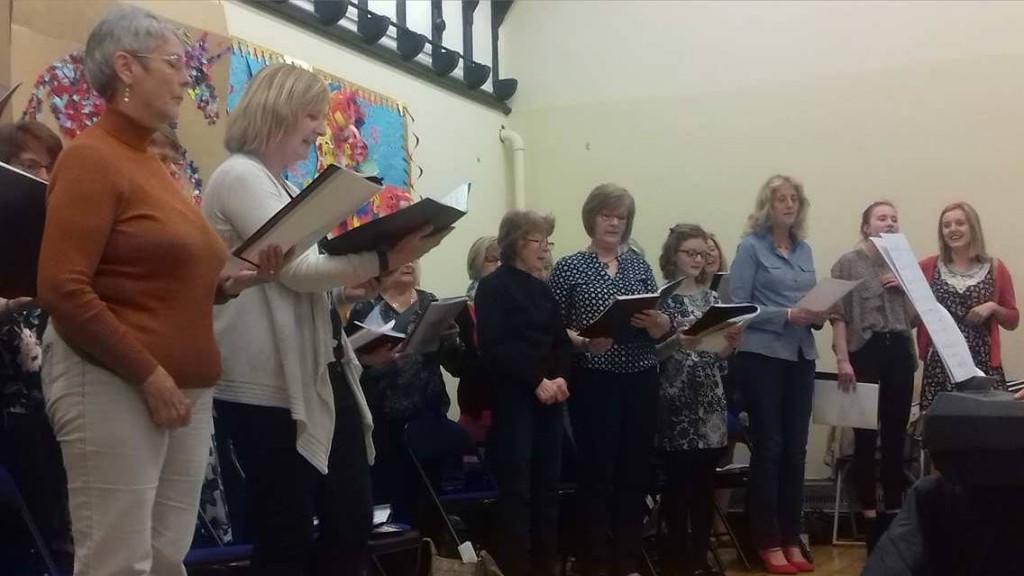 Wow! Tutbury has its very own Gareth Malone. What a tremendous village event this was in support of APP's Music4Mums: a choir full of life and harmony and some amazing solo performances by young and not so young singers.

You just had to be there to feel the joy and the coming together in support of APP.

Steve Mitchell, Tutbury's charismatic Choirmaster and his wife, Jenny, led not only the choir but also such rousing community singing that the rafters lifted off Tutbury's Old School Hall.

Warm thanks go to Elaine Williams - the ever bubbly organiser of the event who, once she heard of APP's Music4Mums, seized the initiative and managed to gather together a team of willing bakers, tea servers, clearers, raffle prize givers and all manner of helpers to make it a truly memorable event.

To give a flavour, the local landlady, Kaz McLean of The Leopard, Tutbury socking "Goodness Gracious : Great Balls of Fire!" to the assembled; a nervous young George (Williamson) beautifully singing "Candle in the Wind" and an absolute star in the making called Eleanor Cawser giving the most poignant, unaccompanied rendition of an Etta James number, "All I could do was cry" and so much more talent besides.

The audience, including babe in arms, Olivia were delighted by the amazing voice of 15-year-old Lilly Prince (whose grandmas both recently joined Harmonics Community Choir) when she sang, “Part of that world” from The Little Mermaid.

More than one audience member, including some burly-looking chaps, were seen to wipe a tear from their eye when Caroline Potterton (whose grandma, Veronica is also a Harmonics soprano) sang, “On My Own” from Les Misérables and all the guest performers and audience joined in when the choir sang, “I Dreamed a Dream”.

Throughout the tea break Adrian Blamire (APP's Treasurers husband) serenaded us in such rich tones that it was clear he was being talent- scouted by the choir committee and would not be let out alive without signing - up !

At the end of the evening, APP volunteer, Heather Heron, spoke about the charity's work and thanked all for their kindness and support in affording her the opportunity to raise awareness of PP and funds for APP. 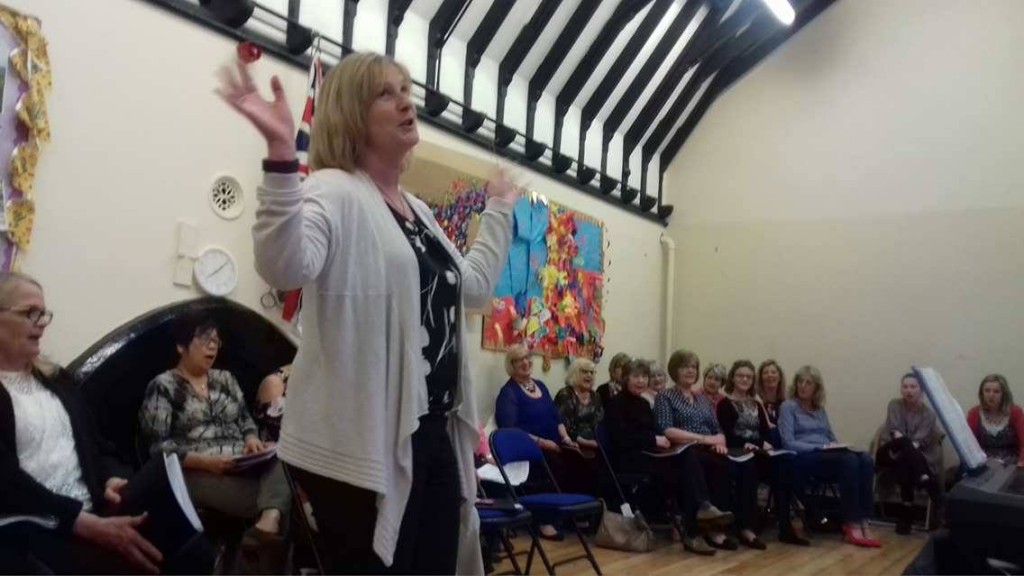 Dust off your instruments, Ripon Community Orchestra are holding a ‘Come & Play Session’ in Bishop Monkton Village Hall, near Harrogate.

The orchestra  ‘invites players from all walks of life to come and enjoy an afternoon tackling Beethoven’s 1st Symphony.’

The afternoon concludes with a play-through performance of the piece at 5pm and spectators/listeners are welcome! There will be a collection for APP.

The Play Along takes place on Sunday 7th May 2017 at Bishop Monkton Village Hall, 2.30-5.30pm and we are very grateful to the Orchestra for supporting Music 4 Mums! 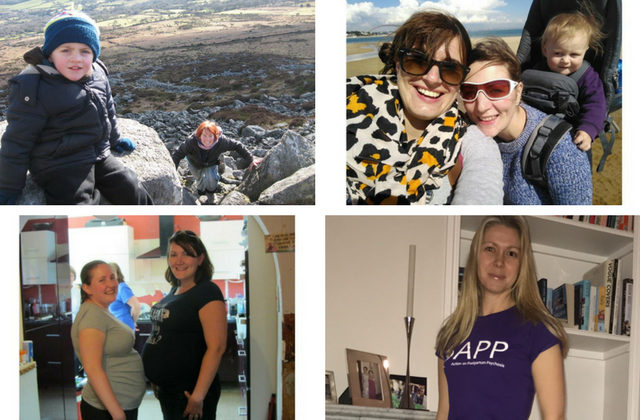 There's so much athletic activity going on! All links go to fundraising pages where available so please click through, read their stories and support their fantastic endeavours.

Thanks and good luck to you all. 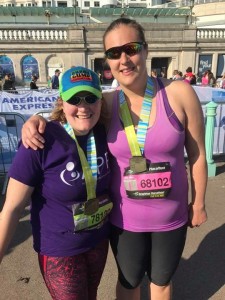 Congratulations to Holly Haywood who ran the Brighton Marathon on 9th April in 5h 46m in blazing heat! Only 10 more marathons to go.

Congratulations also to KT who completed the London Marathon at the weekend, raising £4,000 for APP.  We're waiting to hear more about her experience.

If you're taking on a challenge for APP please let us know. Email fundraising@app-network.org