A team of 17 from Uned Gobaith MBU in Swansea Bay are taking part in the APP #MilesforMumsandBabies Challenge this month - aiming to cover 1000 miles between them during May.

In their first week they covered over 300 miles, initially doing the majority of them separately but they also have some group walks and runs planned for the next couple of weeks.

Bethan Williams, Nursery Nurse at the unit, has been keeping us updated on their progress. She says 'It's been lovely for us all getting out in the fresh air and has been a great team building activity, we have all enjoyed encouraging each other through the week and are looking forward to continuing'.

Follow their journey and show your support for them at: www.justgiving.com/team/TeamTonnaTrekkers

Living with bipolar meant that we had lots to consider when we were planning a family. We had to get the perinatal mental healthcare team involved from the very start to make sure we had a plan if anything were to go wrong. I knew that, because of my bipolar diagnosis, there was a chance that giving birth could trigger my symptoms, so there was talk of me being admitted to a Mother and Baby Unit (MBU) should I need that extra support.

I didn’t really know anything about MBUs at that point, and I was feeling really well so I felt confident that all would be OK. However, towards the end of my pregnancy more problems arose – I had preeclampsia, high blood pressure and gestational diabetes. It meant that I was under additional pressure, but my mental health still seemed to be on an even keel.

However, I was then told I had to have an elective caesarean and, because I’m on medication for my bipolar, I had to come off it 24 hours before the surgery. This was to allow the medicine to be removed from my body before giving birth.

I had the caesarean as planned on the 17th May 2019. Unfortunately, they had problems getting the epidural into my back so I had to be sedated. When I came round, they initially gave my baby to me but then immediately took him away again because he had a temperature and wasn’t feeding. He was taken into special care.

In the personalised care plan that the perinatal mental health team had put together at the start of the pregnancy, it stated that I needed to have my own, quiet room as lack of sleep can be a big trigger for bipolar symptoms. Unfortunately, somebody else needed the room so I was moved to a ward with crying babies. At this point, my baby boy was still in another part of the hospital.

Eventually, we were given a special care room together because, in addition to my bipolar risks, my little boy had to be tube fed. But by this point I was already becoming unwell. My mind was racing and I wasn’t sleeping.

The next thing I remember is waking up in the MBU in Manchester – many miles from our family home in North Wales.

Prior to being moved to the MBU, I was in a state of psychosis and my memories of this time are a complete blur. I think my mind has just shut out memories of the trauma, but it was a different matter for my husband, who was in the throes of it all, desperately trying to get me the right help. It was really difficult for him because the midwife was off, as was the care coordinator and the psychiatrist! I was initially transferred to a PICU (Psychiatric Intensive Care Unit) in North Wales but then I was moved to the MBU in Manchester as there was nothing closer to home. 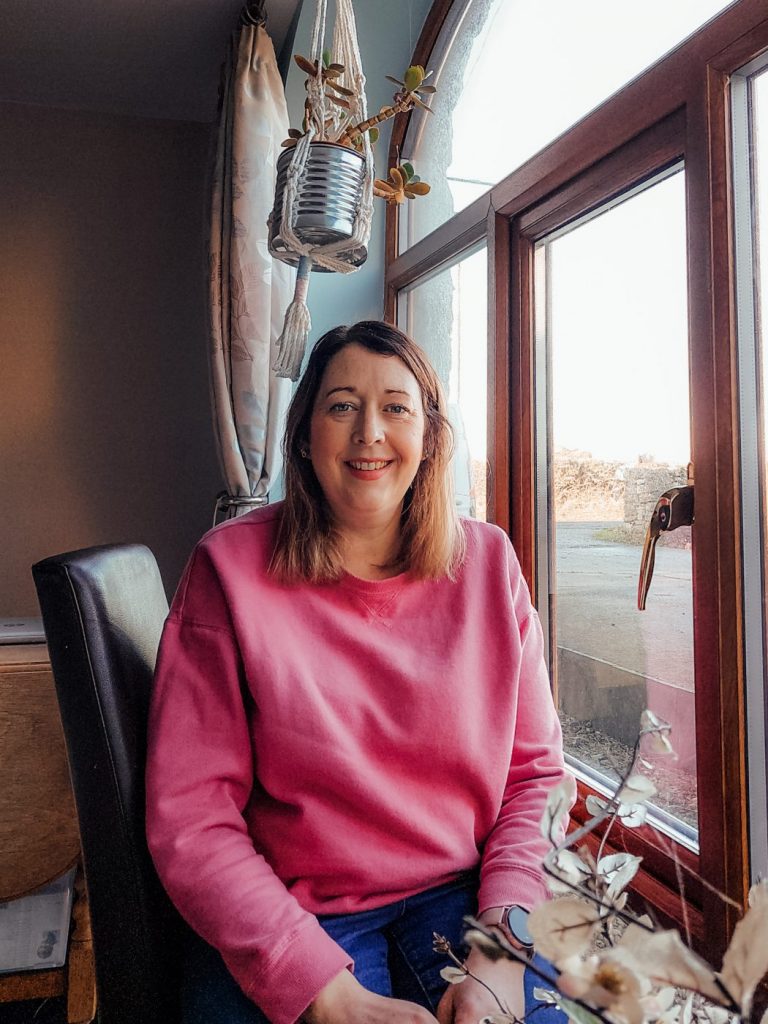 I was grateful to have access to an MBU, as it meant that I was able to stay with my baby. But the fact that we had to travel two hours from home made life really difficult. Each day, my husband was travelling for four hours between the hospital and our home, and doing a full time job in between all the travel. The stress he was under was immense.

Regardless, Tommy continued to visit every day and that’s something I am so grateful for because, when you’re in hospital so far from home, it can feel really isolating and lonely. Two hours is a long time when you’re in mental health crisis. I did make some friends in the MBU, but when you’re so far from home it makes everything feel ten times harder.

I had to have ECT (Electro Convulsive Therapy) whilst I was at the MBU, but this was a treatment that had worked for me in the past and, combined with the medication, I started to slowly recover.

Eventually, I was allowed overnight stays at home, then visits for a few days at a time and then, by around the end of July, I was finally discharged. Getting home was such a good feeling, and I really started to feel well again.

However, unless something changes, I don’t think we’d consider another baby as the experience was far too stressful and traumatic for the family.

There’s a national shortage of MBUs overall but, where I live in North Wales, we literally don’t have one at all. I remember the doctor telling me that, if we decided to have another baby, I would probably need to give birth in England so that I had quick access to specialist care if I became mentally unwell again. Because I’m Welsh, I really wouldn’t want to feel as thought I was forced to have my baby in England. 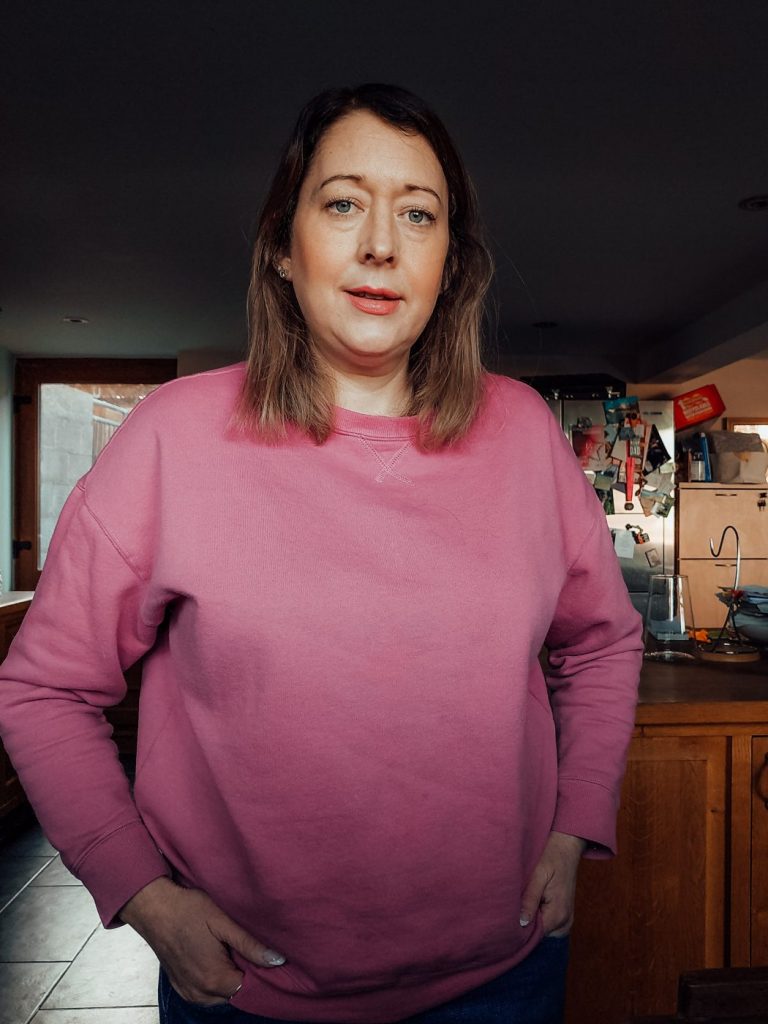 I’m also not confident that we’d be able to get in to the Manchester MBU again. There is such a shortage of MBU beds, so, if we couldn’t get in, it could mean travelling even further away – and the strain on Tommy, and myself and the baby, would be unbearable.

I know how lucky we are to have our baby boy but we’d love for him to be able to have a baby brother or sister. For women like me living in North Wales who are at risk of serious postnatal mental illness, there needs to be specialist care closer to home. I know I definitely communicate better in Welsh, especially when I am unwell, so having support in the Welsh language is also really important.

This is why I’m campaigning for an MBU for North Wales – so other new mums and their families can access support in their first language and to stop so many having to travel so far from home to get the essential care they need.

We are absolutely thrilled that today, our brilliant partner peer support coordinator, Simon O’ Mara, completed his mammoth 852 mile journey raising awareness of postpartum psychosis, its impact on partners and the need for more Mother and Baby Units (MBUs) in the UK.

Marking the launch of a new support project for the partners of women who develop postpartum psychosis, Simon challenged himself to complete a virtual tour of all UK MBUs to highlight their importance in caring for the whole family unit at this critical time.

Simon, whose wife was diagnosed with postpartum psychosis 15 years ago, said: “As a partner, when all hell’s breaking loose and your wife and child have to go to an MBU, even though it’s the right thing, you feel like you’re losing them. But for some people, due to lack of services in their local areas, they have the added difficulty of travelling a really long way to see their loved ones. 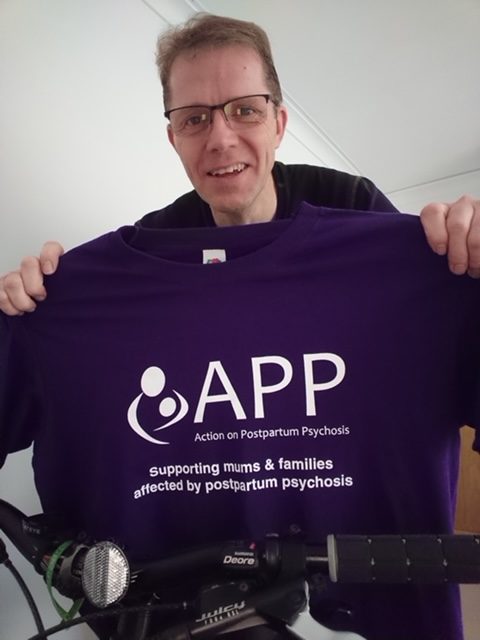 “I initially planned to do the journey out on the road, but due to lockdown restrictions in the early stages of planning, I changed my plans to complete the cycle ride on my smart trainer.

“Doing a smart cycle ride of 852 miles felt like it might actually be a little easier – you don’t have to contend with the weather or road traffic. But it proved really hard at times, especially after a long day’s work when all you really want to do is relax and put your feet up with your family.

“Using the Zwift software and cycling virtually with others from all around the world was a real motivating factor though, as was meeting with some of the MBUs along the journey via Microfost Teams. It’s really kept me going and I’m delighted to have raised £800 for Action on Postpartum Psychosis.”

Simon added: “APP has been campaigning for more MBUs for many years now, and cycling the distances between these services felt like a really good way to show just how these gaps in provision can affect families.”

Dr Jess Heron, Chief Executive, Action on Postpartum Psychosis, said: “Families across the four UK nations are often faced with difficult decisions about receiving specialist MBU care many miles from home or being admitted to a general psychiatric ward. As women can expect hospital treatment to last 8 to 12 weeks, and full recovery to take many, many months, this distance can be an enormous pressure on new families. Families in Northern Ireland, North Wales and the North of Scotland do not yet have access an MBU in their region.

“While we know that experiencing a severe mental illness at this time can be devastating for women, our research shows that partners also describe the experience as the most traumatic of their lives. Many men describe long-term impacts on their own mental health. NHS England have made a commitment as part of the Long Term Plan to inform, signpost and support partners. We hope other regions of the UK will follow suit. MBUs play a vital role in supporting partners and entire family units at this time and have expertise that general psychiatric units do not have.

“We have been working with partners for a long time at APP to support them with information and signposting about postpartum psychosis and getting help, but we are delighted that we now have a dedicated peer support team who can provide email, telephone, forum and video call support for dads and partners. We work closely with all UK MBUs to ensure that all who need it have access to peer support when postpartum psychosis impacts their family.

”We are so grateful for Simon’s commitment to raising awareness of the support needs of partners and we’ve all been cheering him on from the ‘virtual’ sidelines! We are all incredibly proud of what he has achieved.”

To find out more about Simon’s story, or to add to his fundraising efforts, visit his JustGiving Page